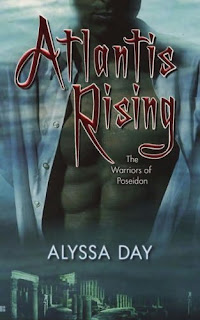 “Eleven thousand years ago, before the seas swallowed the Atlanteans, Poseidon assigned a few chosen warriors to act as sentinels for humans in the new world. There was only one rule – desiring them was forbidden. But rules were made to be broken....”


Conlan is the High Prince of Atlantis. He has sworn to safeguard mankind against the vampires. After seven years of imprisonment and torture by Anubisa, the goddess of the night, he returns home to Atlantis only to find out that an very important artefact, the Trident, has been stolen from the temple of Poseidon. Now he and his warriors have surfaced on a mission to retrieve Poseidon's stolen Trident and declare war on all vampires.

Riley is a dedicated social worker in Virginia Beach, she is also an empath with a special connection to the sea. She is courageous, pretty, smart, witty and always blurts out whatever comes up in her head. After a tough day at work she goes to the beach to relax, there she is attacked by three men and Conlan safes her. Since she is an empath Conlan can’t let her go, he needs to protect her against the vampires because she could be very valuable to Atlantis. From the moment they met there is an intense attraction between them, he wants to claim her and make her his, but Conlan has a war to fight and there is still the matter of the missing Trident....

The warriors of Poseidon are Conlan, his brother Ven, the high priest to Poseidon Alaric, Justice, Brennan, Bastien, Denal, Alexios and Christophe.

What a great debut of Miss Day in the paranormal genre! She has created a whole new world full of hot sexy alpha males... okay so there are some similarities between Day and other writers, but that didn’t bother me at all. I just got pulled into the book and could not stop reading, as I got to the last page all I could think of was I want more!

The way Miss Day describes the warriors, all I can say is OMG!! She has make them so divine, you just have to love them.... They all are so different, they all have been hurt one way or another, that’s what makes them so interesting and you want to know more about them. And the women in this story, Riley and her sister Quinn, they don’t take crap from anyone. They are very independent and nobody tells them what to do. Girlpower! I just love Conlan and Riley, their interactions are so intense and sensual. The interactions between the warriors are sometimes just hilarious!

What I liked most in this book, besides a great plot, is Miss Day’s tremendous humour, it’s great! So here are some quotes.

“Yes it is definitely me. If I am only a figment of your imagination, can the figment say that I’d really appreciate it if you’d ...rethink... your clothing before you show up in front of my men? Not that I don’t appreciate your choice of nightwear.”

Conlan and Ven are having an argument and Alaric says to them:

”Lovely. Very impressive. We have Reisen on the loose with the Trident and some unknown threat who has drained our prince’s power, and yet we have time to play ‘whose d*ck is bigger?’ between the brothers Grimace.”

Conlan to Riley and vice versa:

“Sitting and waiting sucks... You think? And yet that is what you want me to do? That’s different. You’re ..... A woman? Oh, you so do not want to go there, mister. Riley, you are the heart that beats within my body. If you were to die, my existence would end with yours. Conlan, you’re gooood. Yes I know.”

So in short, I like this story and I am looking forward to read the next volume in this series. Personally I like Alaric and Christophe, I can’t wait to read their story.... Atlantis Rising is an easy read, romantic, sexy and compelling. If you are going to read this book, make sure you have all the time in the world because you won’t be able to put it down.