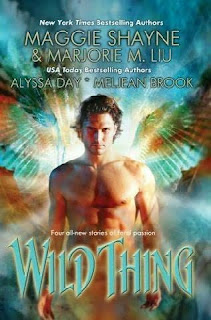 Bastien is a warrior of Poseidon, he protects Conlan, the High Prince of Atlantis, and mankind against vampires. He was forced to commit unspeakable acts in the name of protecting humanity, but hides his troubled mind from his fellow warriors. Now the old alliances are changing and the battle against the vampires is getting worse, he is asked to be an official Atlantean liaison and form an alliance with a group of shape-shifters that has gone rogue. His way in with this group is a woman he met briefly two years ago, the only woman that ever got under his skin ...

Kat Fiero, official National Park Service ranger, is half human, half shape-shifter. She recognises Bastien immediately as the handsome warrior who has saved her on the beach two years ago from vampires. Together they try to convince the alpha of her pride, Ethan, not to form an alliance with the vampires. They fear that the vampires have alternative motives and will use the pact against her pride, Ethan wants proof of this before he makes his decision. Both Bastien as Kat feel this intense attraction between them, but a relationship between an Atlantean and a shape-shifter is not allowed ...

So this is the second part in the Warriors of Poseidon series. I was looking forward to read it after Atlantis Rising and was not disappointed. I like it! Miss Day has a way with words, the dialogues sparkle and she has a tremendous humour.

Bastien to himself about Kat:

“I offer my sword, my heart, and my life to protect your own. From now until the last drop of ocean has vanished from the earth. You are my soul.”

“Oh boy. Next I’ll be taking out the garbage and shopping for curtains.”

Ven to Bastien and vice versa:

“You remember that hot ranger you saved from that gang of bikers a couple of years ago? Kat Fiero? Yeah. Vague recollection.”

“Vague recollection of that day, twenty-one months and three weeks ago.”

This story is an easy read, well written but is lacking depth as most anthologies are. It would have been nice if the relationship between Bastien and Kat was explored in depth. The story is just too short and told with too much haste. I did not like the end, it felt like the story wasn’t finished ... What saves it from being just an average tale is Miss Day’s humour and talent for writing sparkling dialogues.