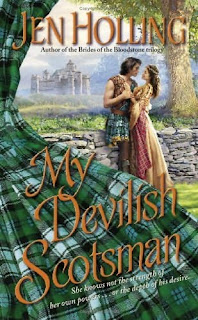 “If you marry me you do so understanding that you are mine.”
His hands tightened on her arme and he stared down at her, eyes hard. “I will not share you.”
Gillian tried to twist away from him. He was a fool if he thought he could be rid of her so easily and since he would not release her, she stopped struggling and met his gaze. “You’re not getting rid of me.”
His mouth covered hers in a hard kiss of posession that sent her senses reeling. She surrendered immediately, her body softening, melting into his.
“I won’t share either,” Gillian finally said. “Do you understand me?”

Gillian MacDonnel is the middle one of three sisters and the only one with no magical powers, or so she claims, she is no witch like her sisters Isobel and Rose. Her father is mortally ill and has arranged marriages for her and her sisters so they will be well taken care of after his death. Isobel in the meantime has married the man she loves en Rose can also marry someone her own age, young and handsome. But Gillian is promised to an old Frenchman. Gillian does not like this at all. The only other solution is to marry that darkhaired sexy man who makes her heart race, the duke of Kincreag. This is Isobel’s former fiancé.

The duke of Kincreag, Nicholas, has had it with women! His first wife was unfaithful, lied and cheated. He promised his good friend Alan to marry his eldest daughter, Isobel, who then just went and married someone else. And now they want to marry him off to the middle sister Gillian so she won’t have to marry an old Frenchman. To prevent this from happening he refuses to take another step into Alan’s home. However when he receives word that his friend will not live to see the morning he races to him...in vain...Alan is very ill but is most certainly not dying yet. Alan asks him again to marry Gillian and not able to refuse his friend anything he agrees reluctantly.

Gillian has already fallen in love with Nicholas and wants him to fall in love with her to. During a dinner to get to know each other better, Gillian slips a love-potion in his wine, he sees this and without her noticing gives the wine to the dog. He is very suspicious, afraid she is trying to poison him. But the dog is unharmed...only very unwilling to leave Gillian’s side. So what did she slip in his wine?

When Gillian moves into her new home strange and inexplicable things happen and Gillian discovers that she does have magical powers. She can communicate with the dead. She also finds out she is cursed...Nicholas won’t have it and forbids her to to something with it. The witch-hunt is still in full force, every day some woman ends up on the stake. When there are some attempts on her life Gillian gets fed up and calls in her sisters. Her sisters accuse Nicholas because his first wife also died under strange circumstances and he was the suspect. She fell of the cliffs right after she and Nicholas had had a fight and her body was never found. But Nicholas claims he would never hurt Gillian.

This is book 2 of the MacDonnel Brides Trilogy and it gets better and better. Gillian is beautiful, sweet but also feisty and has a ready tongue. Nicholas is tall, dark, handsome and silent. He reminds me a little of Sin (Kinley MacGregor), so he’s totally okay! Once again nice humor and dialogues, a sensation-packed story and just when at the end of the first book you think you know exactly what the outcome of the other two books will be, you’re wrong!!