Alexandra Benedict - Too Great A Temptation - Too Trilogy 1 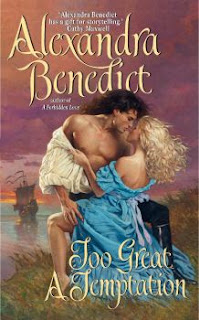 Once he was a notorious sinner, he was called the Duke of Rogues, but when his brother dies at the hands of pirates, Damian Westmore has only one thing on his mind…revenge. He is forced to take a job on board a merchant vessel when he is broke and needs to return to London. Never in a million years did he anticipate to join the same crew who killed his brother or come across a stunning siren, who just happens to be the captain’s sister. She stirs up all these emotions he has kept in check for so long and there is no denying their attraction for one another. How is he to strike down the pirates without hurting the feisty siren, the one who touches his heart…

Determined to be a pirate and to escape a dull life on the mainland, Mirabelle Hawkins has stowed away on board her brother’s pirate vessel. The infamous captain Black Hawk and her three other brothers are not happy to see her but decide to give her one chance to prove herself, provided that she is no distraction to the crew. From the moment she meets Damian she knows he is a temptation too great to resist. She cannot avoid him on board the ship nor can she reject his touch and kisses, but Damian is not who he appears to be. How can she give in to her desire for the one man who is bent on destroying her family…

Too Great A Temptation by Alexandra Benedict is the first part in the Too trilogy and it pleasantly surprised me for it was such a joy to read. From the first page I was immerged in a captivating story that demanded my full attention till the very last page and left me hungry for more. This story has a typical historical romance vibe, but at the same time it is refreshing and fast-paced to read.

A great part of this story takes place on board a pirate ship and this author lures you into her world with her superb writing skills. With a keen eye for detail she describes the day-to-day life on board the vessel, the struggle of being a woman in a man’s world and she builds up the underlying tension between her main characters to perfection. The dialogues sparkle, are snappy and full of wit. The plot is simple and human, but it keeps you enthralled.

You will immediately fall in love with the mesmerizing and charming characters in this book. The main characters are Damian and Mirabelle (Belle), they are well-drawn and rounded, giving their romance a depth that will resonate with the reader. Damian is easy to figure out, he used to be a sinner all the way but he is weighed down by the guilt over his brother’s death. Now he has to clean up his act and is trying to redeem himself by avenging his brother. Belle is not your average type of heroine, she is a feisty, pretty woman who speaks her mind and wants to be a pirate. However, most of all she wants to be accepted by her brothers and belong somewhere. Belle has to be assertive otherwise her overprotective brothers will completely carp her. Their interactions are dynamic and curt, they brighten up the pages.

Damian to Belle and vice versa:

“You speak your mind most freely. It’s not what a proper miss would do.” “And what do you know of a proper miss, Damian?” “I know enough to suspect an innocent maid would never speak of things lustful … which leads me to believe you might not be a very innocent maid.” “Who I am is none of your affair.” “But you are my affair, Damian.”

The secondary characters immediately caught my eye. Belle’s brothers are hilarious, witty and they supply you with lots of snappy bickering. James is the leader, William is the even-tempered one, Edmund and Quincy are the youngest of the lot and are always at each other’s throats, they don’t care about propriety or order. Your heart cries out for Belle who has to deal with her overprotective, “loving” brothers. With secondary characters like these Hawkins boys you will keep flipping those pages faster and faster.

Quincy to Edmund and vice versa:

“What is the matter with her?” wondered Quincy. “I don’t know,” said Edmund, his attention back on his finger. “Maybe she’s having her monthly courses.” Quincy looked back at his brother. “I’m going to knock your teeth out for putting that thought in my head.”

With Too Great A Temptation Alexandra Benedict has written a story you will remember long after you have finished it. This story is the perfect combination of a heart rendering romance, fast-paced action, captivating characters and witty dialogues. In short, Alexandra Benedict provides you with top-notch reading material!