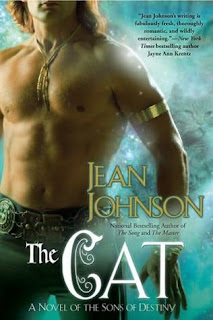 The fifth Son shall seek the sign:
Prowl the woods and through the trees
Before you in the woods she flees
Catch her quick and hold her fast
The Cat will find his home at last

Eight brothers, born in four sets of twins, two years apart to the day – they fulfill the Curse of the Eight Prophecies. Though no longer trapped in exile, their growing family faces new problems. For the fifthborn son, it is getting his Destined Bride to trust him…

Watching his older brothers fall in love one by one, Trevan realizes that he cannot avoid his destiny nor does he want to. Unlike his eccentric twin Rydan, Trevan is more than ready to meet and court his destined bride. He misses the company of a lovely lady, after all he was the womanizer in the family before they got exiled. So when Amara finally arrives at Nightfall he can’t wait to start his courtship, except there is one problem, she does not trust mages. Courting a woman who is arrogant, haughty, bad-tempered and a natural shapeshifter is not easy, especially when she constantly changes her shape and flees. However, Trevan is determined to unravel all her secrets for she is his destined bride. He is not called the Cat for nothing and the Cat likes a good challenge…

Amara of the Shifterai is tired of being on the run for mages who are after her sister’s powers. To protect her sister they have left their homeland and their lives behind them. Her sister has led them to Nightfall, claiming they will be save there but Amara is not so sure for the isle is heaped with mages. The people of Nightfall seem nice but Amara has been protecting her sister for so long that she is on her guard. Trevan catches her eye but their cultural differences confuse her, still she feels drawn to him. Can she truly trust him with her most shielded secret?

Yes! Once more we travel back to the Isle of Nightfall to meet those sexy warriors again and to witness how Trevan fares with catching his bride. Jean Johnson knows how to grab your attention, the moment you open the book you return to the same sentiment of the former parts that is so characteristic for the Sons of Destiny series. This special vibe alone compels you to read on and on.

Only this time not one but two women, Amara and Arora, arrive on the isle. Matchmaker of the family, Morganen, cleverly intervenes to make sure that Rydan, who is determined to fight his destiny all the way, does not meet his destined bride before Trevan does. Rydan's story will be told next in The Storm, it takes place at the same time as this one.

Trevan’s intended bride Amara is not a very likeable person at the beginning. She has been on the run for so long that she does not trust anyone but herself and her sister. Back home she was a princess and she has a hard time accepting that she can never return to her homeland and claim her rightful place. She lashes out at everyone, even her sister, for she feels she had to sacrifice a lot to keep her sister safe.

Trevan is not always rated at his true value by his family. He is good with wood and his brothers turn to him for advice when it concerns women, but he is also good in creating new artifacts and that is often overlooked. He and his younger brother Koranen are rather frustrated over the lack of female companionship and he feels that his happily-married-brothers could be a little more understanding towards him and his brother about this.

Like in the previous parts of the series the world-building is extensive. For example, we get a lengthy description of the Shifterai, Amara’s world and its culture. This makes it easier to understand the cultural clash between Amara and Trevan, it supplies the reader with several, hilarious incidents. As for the storylines of The Cat, you could say the main focus is on Trevan and Amara, then we have the progress on Nightfall as an incipient kingdom and of course the mysterious actions of Rydan and Morganen. The plot thickens more and more with each part.

But what does it for me every time in this series are the highly amusing interactions between all the characters and the curt bickering between the brothers. These interactions counter-balance the extensive (but not tedious) world-building, they are easy and fast-paced to read and they are a key-element in your craving for wanting to flip the pages swift as an arrow.

“Gods in Hell! Does anyone mind if I just drown myself, right here, right now? Because I would be a lot less frustrated if I were dead!” Morganen slapped the back of his twin’s head. “Knock it off, Brother! And watch your language. Your woman is coming, I promise you that.”

With The Cat Jean Johnson has delivered once more an original, magical and scintillatingly tale full of delicious twins! She left me yearning for more, fortunately we have three more stories to look forward to. The Sons of Destiny series gets better and better with each part!