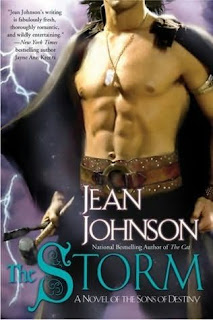 The Sixth Son shall draw the line:
Shun the day and rule the night
Your reign’s end shall come at light
When Dawn steals into your hall
Bride of Storm shall be your fall

Eight brothers, born in four sets of twins, two years apart to the day – they fulfill the Curse of the Eight Prophecies. Though no longer trapped in exile, their growing family faces new problems. Now the sixthborn son must find a way to trust his Destined Bride…

Out of the eight brothers, Rydan is the only one who does not embrace his destiny. He is determined to fight his prophecy with might and main. So when he is asleep in his most shielded haven of refuge and awakes with a start, he is shocked to find himself on top of a real woman, Rora. He kicks her out of his refuge and brings her to his twin, convinced that she is his destined woman. Only then he discovers that not one but two women have arrived at Nightfall and that Rora is his bride to be. Bent on not fulfilling his prophecy he retreats to his refuge but she keeps seeking him out and so much the worse, he can’t get her out of his head. But fulfillment of his prophecy means he loses everything he worked so hard for and he can’t let that happen…

Together with her sister, Rora has fled her homeland to protect her secret. She has unusual strong powers and other mages will do anything to control them. Her powers have guided her and her sister Mara to Nightfall. When she meets Rydan under very passionate circumstances, their attraction is immediate. Her powers show her what the others cannot see, namely Rydan’s secret. She sees what torments the handsome mage and why he lives as a recluse, away from his family. If only she can persuade him to trust her and let her help him before his secret destroys him. Ironically it turns out that he is also the only one who can help her with her secret…

Right from the start of this series the two brothers who caught my eye immediately were Rydan and Morganen. Rydan’s story is part 6 in the series and it was a long wait before I could read his story and ease my curiosity. So the second the book fell on my doormat I plunged into the story, eager to discover if Jean Johnson could come up to my high expectations. The answer? Yes she did and in my opinion she has surpassed herself with The Storm!

With this story all the pieces of the puzzle regarding Rydan fall into place. Rydan is the most complicated and tormented brother of the eight, he cannot be in the company of his family for long for his inner beast will not tolerate it, causing him unbearable pain. Therefore he lives like a recluse, shuns the daylight and is very lonely. He does not give his trust easily for he has learnt the hard way that most people cannot be trusted. But underneath all this pain there is a real, honorable and gentle man who needs someone to love him and help him domesticate his beast.

Rora carries a Font of her own inside her, this is very rare and it gives her immense powers. Therefore she can See aura’s and Feel emotions. She is tired of getting away from mages who covet her powers, she wants to start over and live a normal life and unlike her sister she does not want to hide behind the walls of her homeland’s customs. She is kind and gentle and she takes things as they are, she does not dwell on the past.

Romance reigns supreme, for the greater part of this story takes place in Rydan’s haven of refuge, the romance between Rydan and Rora is touching, innocent, sensual and well-developed. I adored them as a couple, their love scenes were spine tingling. Rora is just perfect for Rydan. I like the way the plot always takes unexpected turns, this time the emphasis is on the magical fountains. As always Jean Johnson’s world building is detailed, Rydan’s underground refuge is sketched to perfection and the magic fountains come to life thanks to a very vivid description.

But most of all I love the interactions between all the brothers and their wives, the bickering between the brothers, always trying to outdo one another, the collision of characters and the matchmaking schemes of Morganen.

Rora to Rydan and vice versa:

“Now, what is your favorite color? Black?” “Green, actually.” “I wear black to annoy Dominor. It is a very difficult color to clean without having it fade, or stain anything else that may be washed at the same time with it…and I look intimidating in it.”

“I like it when you laugh. You Look like a flower in a bloom, with all those happy colors streaming out of you. And your voice… I like how deep it is.” “Very few men like being compared to a flower, woman,” he groused.

The Storm is absolutely my favorite part in this series so far. It is the perfect mix of a touching romance, a mysterious hero, plenty of banter and a magical and dazzling world. I thoroughly enjoyed myself and I am counting the days till Koranen’s story hit the shelves so I can get my regular fix of delicious twins!