Alexandra Benedict - Too Scandalous to Wed - Too Trilogy 2 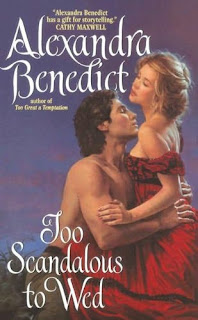 Unwilling to taint any woman with the terrible secret hidden in his heart, Sebastian, Viscount Ravenswood, has sworn never to marry. Luckily, whimsical Henrietta Ashby was never much of a temptation for the devilishly handsome rogue – until now. Suddenly, Henrietta has learned to seduce him with a bewitching charm… and clandestine midnight kisses.

Henrietta would go to any lengths to catch the eye of the man she’s long loved from afar – even seeking the help of the most notorious courtesan in England! But as Sebastian’s secret follows them from the ballroom to the boudoir, and his diabolical enemy plots revenge, will Henrietta risk her life to offer him a passionate redemption… or will he prove to be too scandalous to wed?

This is part two in Alexandra Benedict’s Too trilogy, the heroine of this story, Henry, we already met briefly in part one of this trilogy. Alexandra Benedict has written another classic, historical romance full of passion, danger and entanglements. What hallmarks her writing is that it is very laid-back to read, her storyline is always fluent and her characters are appealing and very well fleshed out.

Henrietta (Henry) Ashby has had an unusual childhood, her father raised her as a boy and calls her Henry, since he only has daughters and no sons. Therefore he has allowed her many more liberties than his other daughters and that is also the reason that she is still not married. Well, that and the fact that she has been in love with the Viscount of Ravenswood for as long as she can remember, but he only sees her as his sister-in-law. She is headstrong, opinionated, loyal to her friends and family, she knows what she wants and she is very smart. Now the Viscount has returned from his journey abroad she is determined to lure the hero of her dreams in her passionate embrace. She is fierce but also innocent and she soon discovers that the real world is not as romantic as she thought.

Sebastian, Viscount of Ravenswood, has always been fond of the Ashby family, he is also very much aware of the fact that Henry is smitten by him. So he went abroad for a couple of months hoping that on his return she would be married and settled, but he has no such luck and now she somehow looks different but he seems to be the only one who has noticed, all of the sudden little, innocent Henry turns out to be quite a temptation. Sebastian’s heart is black and he is a real rogue at least that is what he believes. He does not believe in a blissful marriage for his parents did not give a good example. He knows that his brother will produce an heir so he shakes off his responsibilities as a Viscount and he indulges in all the vices he can think of, he drinks excessively, has many amorous adventures at the Hellfire Club and completely ignores the rules of society. But losing Henry’s admiration hurts more than he thought and now he wants it back.

Sebastian’s brother Peter and the whole Ashby family make a great addition to the story, they all love Henry and Sebastian very much and you can feel their solidarity. Of course there is always a villain in a story and this one is quite deranged. But most of the space on the pages is filled with Henry and Sebastian’s relationship. You will see their characters grow, Henry’s change from an innocent girl into young woman and Sebastian’s belief that he truly can be a gentleman and not just a rogue and that he is worthy of true love. Henry gives Sebastian a run for his money in the seduction department and she drives him crazy with her stubbornness, so much that he, the rogue, seeks advice from a courtesan to win her back.

“I am afraid we’re in a terrible fix.” Sebastian followed her gaze- and his heart shuddered at the sight of the mistletoe. “My lord, I do believe I owe you a kiss.”

“But you and I are friends”, she said next, eyes slanted in demure innocence. “And it wouldn’t do a’ tall if I kissed you on the lips… instead I will kiss you where you’ve never been kissed before.”

Alexandra Benedicts knows how to throw you into ecstasies with her stories and she provides you with a warm, classic but refreshing love story that will steal your heart. Curl up at the couch with Too Scandalous to Wed and you will disappear into the regency realm and enjoy many hours of first-class reading!