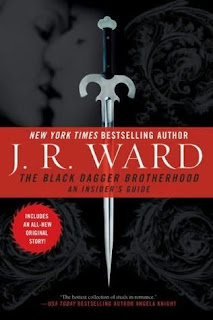 Zsadist (Z) has a hard time getting used to being a father. He actually ignores his daughter and he is not doing well in the mental department, his past is haunting him again and he has nightmares. Bella has tried over and over again to reach out to Z but she just can’t reach him and wonders if their love is strong enough to survive. She has her own after-pregnancy-insecurities to deal with but knows that Nalla’s well-being has to come first, so she gives Z an ultimatum, either he cleans up his act or she and Nalla will be leaving…

This 81 pages long novella takes place approximately two months after Nalla’s birth and Phury’s story Lover Enshrined. It basically covers the problems Bella and Z have as a couple getting used to family life. Of course with Z’s past and his shame for it, this is not so easy. The interactions between Bella and Z are intense and full of emotion. The romance radiates from the pages and all the brothers show their faces in this story.

The plotline is simple, the brothers, the lessers and the relationship of Bella and Z. Once again I was completely wrapped up in that special vibe I remembered from the first three books, that same vibe that made me fall in love with the BDB series in the first place. It is brilliantly written and it is a remarkable example of Ward’s romantic writing skills, because we already know that she outshines in writing unique plotlines. This short novella left me completely satisfied and not once did I have the feeling it was too short, but yes it did leave me hungry for more.

In the Brotherhood Dossiers Ward explains from her point of view how each of the six books were realized and why and how she wrote the things she did, it is really very interesting to read. The personal questions and the interviews with the brothers are funny and gave me many light bulb moments. For example did you know that Wrath is into fly-fishing, Rhage practices yoga, Butch builds rocket models and Phury paints them?

The deleted scenes are truly an addition to this Insider’s Guide, it is regretful that some of the scenes did not make the final cut but Ward explains clearly why they did not end up in the book. Although there is one romantic scene between Cormia and Phury that would have made up for a lot of the romance that I did miss in Lover Enshrined. But like Ward explained, it did not really fit in the timeline of the book, but all these scenes are great to read.

This guide also contains the Slices of Life and the brothers on the board interactions, now some will say that this is old stuff that they already read on Ward’s forum. True, but… Ward’s forum is huge and then the interactions are interrupted with all those enthusiastic posts from the cellies. I like it that I don’t have to search for them on the board and that they are now on paper and not interrupted. Besides you never know if they stay on Ward’s board forever… I enjoyed reading them and yes the BDB-vibe was overwhelming!

The interview with Ward is hilarious, she did not have to say anything because Rhage and Butch completely took over and then, of course, the other brothers had to step in as well, yeah the interview is full of sexy bickering alpha males. There is also a heartbreaking interview with Tohr and Wellsie, the signs of the Old Language, Ward’s favorite quotes from the books and some other fun stuff.

So if you don’t mind reading some stuff that was already posted on Ward’s forum, An Insider’s Guide is a great read. Father Mine is a great short story and the deleted scenes are a great addition. It is great to read how Ward’s point of view is on certain scenes and to have all those little facts neatly organized on paper. Very important to point out is that this guide is very readable and hilarious, it belongs in your Black Dagger Brotherhood selection of books. The bonding scent of the BDB is all over this book, creating that special, addictive vibe that wraps around you like a warm blanket, it will entertain you for many hours, just read it!