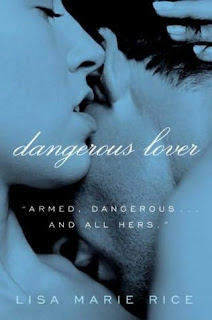 Caroline Lake has been down on her luck for the last couple of years. After her parents died in a car accident she found out that there was no money left due to bad investments of her father. Now she only has her bookstore and her parental home, the last is in desperate need of renovation. To boost her income she takes in boarders but even that is not working. Until on Christmas Eve a tall, dark and dangerous man enters her bookstore and wants to rent a room. Against her better judgment she agrees and he turns out to be the perfect boarder and … lover. For the first time in years she feels happy and carefree. But Jack is too good to be true for he is not who he claims to be and danger follows him wherever he goes…

Jack has spent years in the army and the security business to serve his surrogate father. Now that his father has departed this life and he has taken care of some business that went terribly wrong Jack is free to pursue his own dreams. He has sold his father’s company and is therefore a rich man, he heads to a little town called Summerville to find the one woman he has dreamt of for the last twelve years. The one woman who was nice to him when they were teens and who doesn’t even remember him. He finds Caroline easily and they have this immediate connection with one another. But the enemy is closing in and Jack is about to lose Caroline forever for she is his weak point…

Dangerous Lover is the first book that I have read from Lisa Marie Rice and all I can say is WOW! From page one this book held me captive right to the very end. Lisa Marie Rice’s writing is easy, accessible and it reads like clockwork.

The main storyline tells you the romantic part, the relationship between Caroline and Jack. Caroline could use a break from her money problems, once she was an upper class girl now she struggles to make her monthly payments to the bank but she is always willing to help other people. Jack wants nothing more than to take away Caroline’s problems and love her, to make her his as he has dreamt of for so long. But he is not completely honest with her about his past and it does not take long before Caroline starts to doubt him.

The second storyline provides you with the suspense part of the book. Jack’s former colleague Vince Deaver is coming to town and it is not a social call. He is malicious and a real soldier, he will stop at nothing to get want he wants and he wants Jack’s head on a platter. Your imagination will run riot for Miss Rice is capable to vividly describe every little detail, the love scenes are heated and moreover she knows how to outline her characters to perfection. Caroline’s character is sympathetic, Vince will send shivers down your spine but it is the way she has described Jack. This tall, muscular soldier will make your head spin!

There are not many supporting characters in this story, the most important one is Sanders. He is Caroline’s ex-boyfriend. He is the typical rich guy who was born with a silver spoon in his mouth, he is used to getting his way and doesn’t know the meaning of the word “no”.

Miss Rice does a great job in building up the suspense, you know Vince is coming, you know Jack should watch his back, you just keep flipping the pages waiting for disaster to happen. The only thing that annoyed me and almost literally gave me a cold shower was the end, it is very abrupt and left me unsatisfied. For me, the story is not finished for I am dying to know if Caroline and Jack fare well, therefore an epilogue would have been most welcome.

All I can say is that I enjoyed this story very much, except for the end. Miss Rice knows how to portray her men and Jack has become one of my favorite heroes. Now that Lisa Marie Rice lured me into her world full of suspense, romance and irresistible men, I am eager to read Dangerous Secrets and once again get swept of my feet.