Kimberly Dean - In Her Wildest Dreams 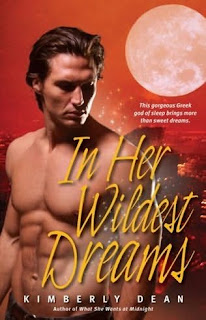 Reviewed at request of author for realmsonourbookshelves.com

Shea Caldwell is drop dead gorgeous, she is a successful business-woman and a brilliant research scientist. She is very much in control of her life. So far her life was great but now her past has caught up with her. In her childhood she used to walk in her sleep, always waking up in strange places and not knowing what she had done, until that one frightful night when she had done something horrible, something that still weighs heavily on her delicate shoulders. Now strange things are happening again and her biggest fear has come true, for she is sleep-walking again…

Derek Oneiros is a Dream Wreaker, a spirit of the night that bestows dreams on sleeping humans. During the day he runs an intelligence services agency and Shea is one of his clients. He is attracted to her but thinks she is taken, he knows that she does not sleep well and she does not confide in him why. Derek is appalled when he finds out that a malicious and strong Somnambulist is harassing her in her dreams, how could he and his fellow Dream Wreakers have missed this? Determined to help Shea he claims her as his own so he can watch over her at night, but is he in time to save her from the claws of the Somnambulist…

In her Wildest Dreams from Kimberly Dean is the second part in her Dream Wreakers series. It takes off with a fascinating prologue that immediately demands all your attention and it keeps your nose in the book till the very last page. Kimberly Dean’s story is graciously, easy and speedy to read, she attracts your attention with fluent written plotlines, great characters and steamy love scenes.

Derek Oneiros is the prototype of an alpha male, he is successful, always in control and very good looking. He is also called the Machine, for he never fails and he never breaks the rules of the Oneiroi. But Shea has slipped passed his defenses and now he is willing to break every single rule to keep her safe, except that she won’t let him for she likes to be in control herself. He has to find a way to gain her trust and at the same time he needs to keep his night-job a secret.

Kimberly Dean’s band of brothers creates a vivid and lush picture in your mind’s eye. These tall, muscular and sexy alpha males are the Oneiroi, the gods of sleep. They protect the human race in their sleep against all kinds of evil and of course they do this in secret. Their weekly breakfast meetings are something to look out for, the brothers are all well-matched. Their wicked bickering and alpha attitude is comical and will make your knees buckle.

Other characters that play an important part in this story are Shea’s business-partner Phillip and their two secretaries Lynette and Tamika. They are all powerful, unattached characters and they complete the book. The story has two different plotlines but they are connected to one another. They are packed with action and fast-paced to read. The only thing I found a bit annoying was the grand finale, all through the book the suspense is building and building and then it all ends in a rush.

Dreaming was never so desirable, Kimberly Dean will get you hooked on her sexy dream wreakers really fast!