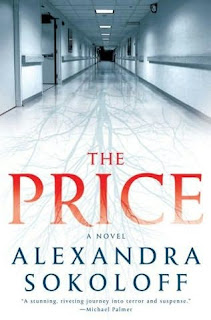 What would you do to save a loved one? How far would you go to safe your own flesh and blood or your significant other from a terrible, nerve-racking, fatal disease? What if someone approaches you and offers to save the one you love, would you do it? Would you make a pact with the devil himself, knowing that for the rest of your life you will never be free from the darkness, knowing that you have to emotional sacrifice yourself and pay a very steep price for he relishes to watch you in agony… ? Would you be willing to pay that price for your loved one?

Boston District Attorney Will Sullivan really has been born with a silver spoon in his mouth, he has a loving wife and daughter and now he wants to follow in his father’s footsteps and run for governor. He is destined for greatness and then tragedy strikes his family. His little girl Sydney is seriously ill and now Will and his wife Joanna spend all their time in the hospital, hoping for a miracle. But Will soon finds out that something weird is going on in the hospital. Patients with one foot in the grave suddenly recover overnight and always this mysterious man, a counselor, is involved in these healings. And now this man counsels Will’s wife and all of a sudden Sydney’s health remarkably improves overnight. Something is seriously wrong and Will is determined to find out what, only to discover that nothing is what it seems and he now has to face pure evil to save his family…

While reading this story this one question popped in my mind over and over again. How far would I go to save one of my children? Alexandra Sokoloff’s second novel The Price took me on a breathtaking journey to a destiny that can best be described as the Twilight Zone. Right from the start I sympathized with Will and Joanna, hoping that they find a cure for Sydney and this alone compelled me to flip the pages faster and faster.

Alexandra Sokoloff’s writing is easy to read. The short chapters keep the story dynamic and fast-paced. Almost every chapter starts with a detailed description of the setting, adding this mysterious vibe to the story and it also made me feel like I was right there side by side with Will. The story is told from Will’s point of view or better said struggle to cope with his daughter’s illness.

In little flashbacks we learn about Will’s life and his relationship with Joanna. Will is still very much in love with his wife and is a devoted father. He is loyal, ambitious, appealing and handsome. But for the first time in his life he really feels powerless as he watches how Sydney is slowly dying. Joanna still bears the scars of her terrible youth, she is a real survivor, beautiful, a devoted mother and perfect wife. But now Will can’t reach her anymore for she has completely withdrawn in herself.

But the moment Will meets Salk, who he thinks is a counselor, the threat of danger radiates from the pages. Salk is tall, elegant and European styled. One cannot deny his presence. Salk’s uncanny precision to say all the right things to Will is unnerving and you just know that he is up to no good. At the same time he comes across so humane, he just knows how to play people to get what he wants and they don’t even know it until it is too late for regrets. They cannot complaint, after all Salk gives them exactly what they want. You constantly wonder who or what he really is and why he has singled out Will.

When Will witnesses strange things he starts to doubt his sanity and soon it is not clear what is real and what is not. Shivers went down my spine when Will entered this Twilight Zone, his struggle to keep his sanity, to prove the things he saw but most of all to protect his family. Alexandra Sokoloff’s writing is so brilliant that at one point even I started to doubt if certain events at the hospital really happened or if it was all in Will’s head.

“Let her go”, Will choked out. Salk shrugged. “I could, it’s true. But let’s be clear. Sydney will die. If we return to the natural order of things.”

“Do you know… in all my years… I’ve never had to make an offer. Invariably, people name their own price. Human beings always seem to know – exactly – their price.”

There are not many side-characters in this story except for the obvious doctors and nurses, the spotlight is on Will, his family and Salk. The emotional encounters between Will and Salk are heart rending, and I fell head over heels in love with Will. A man who is so devoted to his wife, so willing to do anything to keep his family safe. The plot unfolds slowly and little by little you come to comprehend that the end of the story is blurry, vexing but unavoidable.

My first encounter with Alexandra Sokoloff’s writing has whetted my appetite for more of her thrilling suspense. The Price is an emotional, bone-deep chilling suspense story with paranormal elements that will send shivers down your spine while you devour every word. It is simply impossible to put the book down because you just need to know how this story ends. 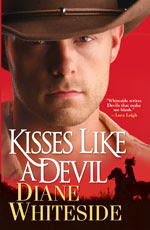 A feminist who believes in free love, Meredith has always battled convention. When her parents urge her toward an odious marriage, Meredith turns to the dashing, thoroughly masculine American who could be her only hope of escape. But nothing is as simple as it seems, and as competition to acquire the new weapon turns deadly, two lovers are drawn into a treacherous game where the stakes run as high as their raw, mutual desire, and the greatest risk of all may lie within an untested and all-consuming love…”

Kisses Like A Devil is the next chapter in Diana Whiteside’s Donovan family saga, this historical romantic suspense story is set against the backdrop of a turbulent world at the turn of the century (1900). After a short prologue that explains Meredith’s situation, Diana Whiteside throws you into a political and diplomatic scheming that takes place in Eisengau.

Eisengau is sort of a military state where the head of state, the Grand Duke, controls everything through his secret police. No change is welcome and none has happened in decades. Eisengau is famous for its unchallenged and superior weaponry.

Meredith wants to steal the only set of blueprints of a powerful new weapon and use them to improve the situation of the workers in Eisengau. She is a high spirited, bold and beautiful lady who feels passionately about her goal. Brian is a rich, hard-working man who is a real patriot and family man. They come from complete opposite worlds, where Brian’s family is close and loving Meredith’s family is cold and self-serving.

“Are you a virgin?” “I’ve had two lovers, for a total of,” she paused to count up, “three hours.” He choked. “Are you always so precise?” “I look forward to enjoying the benefits of your greater skills,” she added demurely.

I have to admit that it took me a couple of chapters before I grew accustomed to Diana’s Whiteside’s writing, it is very defining. The suspense part of the story immediately takes off full steam ahead, overwhelming you with lots of details of all kinds of weaponry and the political scheming of different countries to obtain access to Eisengau’s military equipment. Thanks to a lengthy description you can almost draw a map of Eisengau by heart.

It feels like you have tumbled right in the middle of a Mission Impossible movie in which Tom Cruise has been replaced by Brian and Meredith and evil comes in the shape of Sazanov (representative of Russia). Till ¾ of the book the suspense part is good and believable but it is the end that is hard to swallow, it has lots of loose ends.

For example, the big explosion, the chase of Sazanov for the blueprints and especially how that ends is just too far-fetched. Meredith is the only one who can reproduce the blueprints for an important weapon, yet no powerful nation is coming after her to get their greedy hands on it?? It is like the suspense part of the story has been cut short and I am still waiting for the final big bang to happen.

I don’t know why but Meredith and Brian as a romantic couple do not set me on fire. Meredith is by far the leading person in the story and Brian is the follower, also Meredith’s character is better developed than Brian’s. The romance part is not in balance with the suspense part therefore it is not worked out with depth, because of that the characters of Meredith and Brian do not stand out romantically next to the suspense plot.

And the romantic plotline also has loose ends, from the reader’s point of view it might have been nice to know how the relationship between Meredith and her family ends/develops and at the start of this story Brian’s goal was to find a way to help his brother who is trapped in Peking, but throughout the story the search for help seems to have disappeared into thin air.

Basically where it boils down to is that the end of Kisses Like A Devil is not strong enough to satisfy the reader and that the romance is too flimsy to be really hot and passionate. Till ¾ of the book I found the suspense part interesting and entertaining, however the end of the story was a letdown for me and left me unsatisfied and full of questions.