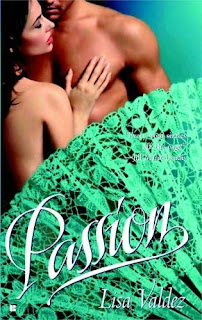 “A woman called Passion. A man who would make her true to her name.

In her second year of mourning, lovely young widow Passion Elizabeth Dare never dreamed she would be with a man again--and certainly not a complete stranger. But amidst the crowds of London's Crystal Palace, Passion finds herself discreetly, yet insistently, pursued by a sensual gentleman who awakens her long-suppressed desires. After a loveless marriage of restrained propriety, Passion abandons herself to true bliss for the first time.

Intoxicated by his encounter with the beautiful stranger, Mark Randolph Hawkmore, Earl of Langley, cannot wait to see her again. As a series of rapturous rendezvous follows, he and his mystery lover find something rare and wonderful blossoming between them. But a blackmail scheme against the Earl threatens to destroy everything. As a scandal brews, each will have to choose between duty and desire...their love for their families--and their love for each other.”

WOW is all I could say when I finished Lisa Valdez’s Passion. This story took me on an emotional roller coaster ride from the first till the last page. Literally every page is soaked with the raw emotions of Passion and Mark. It is such a compelling read that it really is impossible to put the book down to take a little breather.

From page one Lisa Valdez pulled me into the story with her graphic and fluent writing skills, within a few pages she put my imagination in overdrive. The tone of the story is set with the first encounter between Mark and Passion. This takes place at an exhibition behind a large screen, there they have an amorous get-together and we get a taste of how Mark expresses himself.

Do not expect to read another vanilla historical romance novel when you pick up this book. It is understandable that some romance readers, who love the traditional historical genre, especially the stiff Victorian time-period, might be put off by the blunt dialogues and the odd behavior between two people from the gentry. But imo Lisa Valdez gets away with it for it spices up the story and gives it backbone. Next to this she delivers brilliant dialogues, heated passion and a great plot. Mark’s blunt talking only enhances him as a person and mirrors his passion and emotions perfectly.

Mark really is crude, he is a tell-it-like- it-is kind of guy, and he even kind of loathes his own social class for he believes people should be judged by their actions not their pedigree. He loves to work and create things with his hands. Being an architect gives meaning to his so far empty life. He refuses to marry for nothing good can come from a marriage; he has experienced that first hand in his youth by watching his parents. At first, when he meets Passion he thinks it is only lust but he soon comprehends that they connect on a much deeper level and that she completes him.

Passion comes from a warm and loving family. She is a very independent, loyal, sweet and caring person and also a gifted painter. But her failed marriage has left its scars on her. She now knows how rejection feels and will not inflict it on anyone else. Basically that means that she will always put another one’s needs before her own and suffers in silence. When Mark walks into her life she feels alive again and she wholeheartedly enjoys their affaire du Coeur, knowing that it will only last as long as her stay in London. She feels rejuvenated and becomes her old lively self again. But soon she longs for more than just an affair for she needs Mark’s love as much as she needs to breathe.

“You say that now, in my arms. But how will you bear the nights and days?” He drew her closer as he whirled her across the floor. “What will you do when your body cries out for satisfaction? Now that you have found pleasure, it will pursue you, burning and relentless.” Anger and anxiety pumped in his arms. “What will you do? Find someone else? No one can satisfy you as I do. No one.”

Their encounters are full of lust, raw emotions and blunt tell-it-like-it-is dialogues; they are graphic and even a bit kinky considering the timeframe and the fact that he is supposed to be a real gentleman and she a proper lady. They splash of the pages and made my heart ache for Passion and Mark for I was so absorbed in their feelings for each other. Their relationship develops from a simple lust at first sight into a deep, all consuming love.

Set against the backdrop of the London Season Lisa Valdez takes us deep into the society of the Ton, their strict rules and their family secrets. And Mark’s mother has one big skeleton in her closet, one that turns Mark’s life upside down and forces him to give up Passion. The plot thickens when Mark is being blackmailed by none other than the despicable Abigail Lawrence, a relative of Passion. Both Passion as Mark want to avoid a family scandal but they cannot do so without getting hurt themselves.

The Ton provides us with many side characters, two vipers of mothers who are the source of all misery and the lovely, youthful Charlotte. But the two characters that caught my eye were Mark’s brother Matt and John Crossman. Matt is kept in the dark about the blackmail, he is so much in love with his fiancée that he does not see that she loves him for his connections and not for himself. He is a very intriguing, honest guy and somewhat more subtle and compassionate than his older brother. He is a young and carefree gentleman and big brother Mark will do anything to protect him. I immediately fell in love with Matt and I hope the future will bring us his story.

And my heart cried out for John Crossman, Passion’s friend who is secretly in love with Passion, but his love for her will stay unrequited. He is a handsome and amiable rich heir who deserves a fantastic lady. Passion and John share the easy rapport of old friends and she does not want to jeopardize their friendship by being dishonest to him. All these colorful characters enrich the story and add humor and depth to it. They also counterbalance the raw and intense emotions of Passion and Mark.