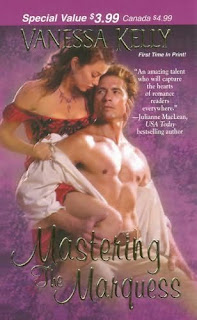 After the death of her father and stepmother, Meredith Burnley took on the responsibility of looking after the estate and her half-sister Annabel. When her uncle shows up she knows he is up to no good. He wants her to marry his son, if she refuses Annabel will be put in an asylum. Since he is Annabel’s legal guardian he has every right to do so. Meredith has now but one choice, with the help of her servants she runs to their estranged grandparents’ home.

Annabel’s grandmother welcomes them with open arms; her family has influence, respectability and is part of the Ton. She also knows the solution for all their problems; Annabel must marry her nephew, Stephen, who is the Marques of Silverton. But love seems to have something different in mind, for Stephen is bewitched by the bold and independent Meredith and Meredith is not quite as indifferent towards him as she wants to be, for he is the most handsome man she has ever seen. He wants to claim her for himself but dutiful Meredith will never allow her feelings for him to blossom if only for Annabel’s sake and besides she is just a shop girl, not a member of the Ton.

Stephen is the ultimate hero for every romance reader who loves the Regency genre. He is tall, handsome, a little arrogant and commanding but he also takes care of his family and is true-hearted. As a young man he fell in love and was rejected and ever since he has made sure that his heart never really got involved in any of his amorous adventures. Now at the age of 35 his whole family is pressuring him to get married, but there is just no woman he can picture himself with for the rest of his life.

Meredith is bold, pride, opinionated and very independent. She has not had an easy life so far and is a real country girl; therefore moving to London is not so easy for her. She wants to see her half-sister settled into a safe, new life and has no expectations for her own life. She learns quickly that she doesn’t fit in with the Ton and since her father made his fortune in trade she is considered just an ordinary shop girl.

Against the background of the continuous scheming and cruel society of the Ton, both Stephen and Meredith struggle with the pressure of what is expected of them. Annabel’s introduction to the Ton needs to be flawless and while Annabel seems to have no trouble taking up her rightful place next to her grandmother, it is Meredith who has trouble with all the strict rules of the Ton and she makes mistakes. Stephen is determined to help both Annabel as Meredith but struggles with his duty and loyalty towards his family, his passion for Meredith and the pressure of society.

Throughout the story you see the changes mainly Meredith has to make. Meredith has to adjust to the strict rules of society, she has to give up some of her independence and accept that Stephen’s love for her is real. Although this story has a fast-paced historical suspense plot, it is really a character-driven story. The development in the relationship between Meredith and Stephen is the pivot on which this story really hinges.

Vanessa Kelly knows how to create a superb various cast of characters. Young Robert is a nephew of Stephen and sees him as a mentor. Their interactions are hilarious and Vanessa Kelly writes witty dialogues that feel really English because she uses phrases as “old chap” and “my dear”. The Earl of Trask is Stephen’s closest friend and he is very intriguing and certainly hero material, I would love to see him in a story of his own. The dialogues between Stephen and Meredith are heated and they leap off the pages. The real threat and danger comes from Meredith’s family and Vanessa Kelly does an excellent job in making you take an instant dislike to them.

Vanessa Kelly’s debut story Mastering the Marquess is a solid and classic historical read. The only thing that bothered me a little is that it is definitely not an innovative story and it could easily be overlooked among the many new releases in the regency genre. That would be regretful, for Vanessa Kelly immediately pulled me into her story with her fluent writing. She knows how to create a drool worthy hero that reminds me of Stephanie Laurens’ heroes and her dialogues are spicy and radiant.

Mastering the Marquess will most certainly enchant every romance reader out there!