Meredith Duran - The Duke of Shadows 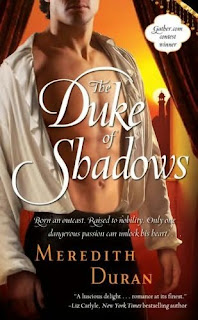 Sick of tragedy, done with rebellion. Emmaline Martin vows to settle quietly into British Indian society. But when the pillars of privilege topple, her fiancé’s betrayal leaves Emma no choice. She must turn for help to the one man whom she should not trust, but cannot resist: Julian Sinclair, the dangerous and dazzling heir to the Duke of Auburn.

To the marble balls of London...

In London, they toast Sinclair with champagne. In India, they call him a traitor. Cynical and impatient with both worlds, Julian has never imagined that the place he might belong is in the embrace of a woman with a reluctant laugh and haunted eyes. But in a time of terrible darkness, he and Emma will discover that love itself can be perilous – and that a single decision can alter one’s life forever.

Destiny follows wherever you run…

A lifetime of grief later, in a cold London spring, Emma and Julian must finally confront the truth, no matter how hard one tries to deny it, some pasts cannot be disowned… and some passions never die.

OK. Right from the prologue this story had my full and undivided attention. I immediately surrendered myself to this story and was thrown back in time to the exotic sceneries of British India in the late 1850’s. Before I was even halfway through this story I realized that I discovered a real treasure that would leave me deeply impressed and utterly in awe. You don’t get to read a perfect and powerful love story like this every day and therefore it will linger in your mind long after you have closed the book. I can honestly say that it has become one of my favorite novels that I will re-read from time to time.

Meredith Duran takes you back in time to a period when England ruled over India, but England’s grip is not so firm anymore and rebellion hangs in the air just waiting for the right moment to strike. Most members of the British Indian society are so arrogant to believe that nothing will happen to the mighty society so they ignore all the signs. Well, their pride will have a fall. It is against this setting that you will meet Emma and Julian.

Emma is a rich, educated, young heiress who has come to India to marry her fiancé Marcus. But she soon discovers that the man she fell in love with is gone for good, she cannot trust Marcus for he frequently strays and is not discreet about it either. He does not love her, he only wants her money. She likes to paint and to learn more about the Indian culture but that is not allowed, proper English ladies do not mingle with Indians. Then she meets Julian and their attraction is immediate, he warns her for the rebellion and guides her through the pits of society for she does not really fit in with the British Indian society. Then the rebellion starts and Marcus betrays and leaves her, in order to survive and escape the Indians’ wrath Emma has to trust Julian with her life.

Julian is the heir to the Duke of Auburn, he is rich, handsome and also part Indian. Like Emma he is an outsider too for the Indian society thinks of him as British and the English only accept him because he will be the Duke of Auburn one day. The rejections in his past by both worlds have made him cynical and kind of a loner. He has tried over and over again to warn the English authorities for the rebellion to avoid bloodshed but no one wants to listen. The instant Julian meets Emma you feel the connection between them; they start as friends who share a certain loneliness and a love for the Indian culture. He does not sugarcoat things for Emma who is still young and naïf, circumstances throw them together and during their long journey towards safety their love starts to blossom while the world around them falls apart.

But one single decision changes everything and in the middle of the rebellion they get separated and cannot find their way back to one another. Misunderstandings keep them apart until fate throws them together again in London a couple of years later. For both of them it seems like a lifetime separated the persons they are now from the ones they had been back in India. Time apparently does not heal all wounds and Emma and Julian have to come to terms with their past and their future.

Duran’s book grabbed me by the throat and while I breathlessly followed the many ups and downs of Julian and Emma’s emotional journey, my own emotions run parallel to theirs for the length of the story. Meredith Duran’s writing is fast-paced and smooth but most of all it is rich in details, emotions and intensity. It is also very expressive which makes it easy to visualize the story and by fits and starts it is even poetic, turning every page into a lyrical masterpiece!

The book is divided in two parts; the first part takes place in India and the second part in England. During this story we see Emma change from a young, innocent, radiant woman into this bitter woman who is not fit to hold a candle to her younger self. The mutiny, the betrayal and the horrors she had to endure still haunt her every day. Julian’s masculinity radiates from the pages; he always keeps his feelings and emotions in check except when it comes to Emma. There is a whole cast of secondary characters that surround Emma and Julian, they all have their own input to the story but Marcus is the most important one. He is like a bad penny that always turns up. His life is so interlaced with Emma’s that somehow she does not get rid of him and he is trouble with a capital T.

The combination of the plotlines, historical facts, the characters, the romance, the suspense and the pace of the story is superb and unique. It is all perfectly in balance. The romance permanently sizzles from the pages, the suspense is brilliantly intertwined and towards the end of the story all the plotlines come together to be unraveled in a breathtaking, exciting and satisfying grand finale. What more can you ask for!

The Duke of Shadows is a stunning debut novel that will absorb you in a heartbeat and leaves you breathless at the end. It is one of the best historical novels out there. Meredith Duran has set the bar very high to surpass herself with her next novel. This story has captured my heart and I will always cherish it for it truly is a perfect read!