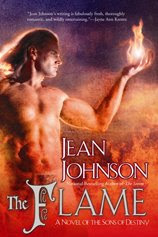 “The Seventh Son shall he decree:
Burning bright and searing hot
You shall seek that which is not
Mastered by desire’s name
Water shall control the Flame

Eight brothers, born in four sets of twins, two years apart to the day – they fulfill the Curse of the Eight Prophecies. Though no longer trapped in exile, their growing family faces new problems. Now that it’s his turn to look for a bride, the seventh-born brother burns with curiosity and anticipation…

Koranen of Nightfall is tired of the Curse – in his case, a destructive flame that courses beneath his flesh. His brothers have wives and lovers, but all Koranen has are blistering reminders of a touch that burns… unless he can find a woman able to endure the literal heat of his passion. Then the Aquamancers arrive, at last affording Koranen the chance to find his Destined bride.

Ostracized for being too good at her job, Danau is resigned to her punishment: never knowing love. But fire and water always create steam, and things do get steamy as Danau and Koranen gradually realize they were meant for each other – even as Nightfall’s future becomes flooded with more trouble than either of them could have imagined.”

Of the eight brothers, Koranen undeniably is the hottest guy around on Nightfall Isle. But he did not really catch my eye until The Song where Jean Johnson described Koranen in his forge as a hot, lean, muscled guy wearing only a loin cloth. And now with The Flame his own destiny is finally known. Jean Johnson takes us back to Nightfall to follow the twins’ journey to find their true love and to create an incipient kingdom.

After two very humiliating experiences in the love department Koranen decided to stay away from anything that has to do with love so he cannot hurt anyone with his burning touch. For years he watched his brothers making out and enjoying themselves but now his own time has come to experience with love. He is kind, generous, understanding and a real gentleman but also lonely and frustrated, he cannot wait to passionately practice what he has learnt in theory.

Danau also had a humiliating experience with love, only she had the misfortune that her former boyfriend broadcasted her defect to the world. Now she only focuses on her work and she has given up all hope of ever experience love again. She avoids physical contact with anyone because she does not accidently want to frostbite anyone. Danau is very prickly and businesslike, a social outcast. She is very lonely for she does not have any friends and she hungers for what she cannot have. Love.

I have to say that I had real trouble with finishing this story, of all seven stories so far The Flame has the most characteristics of a true Fantasy story. For me it also felt different than the previous stories in this series. The first 100 pages were very fast-paced with lots of witty banter between the brothers and their destined brides, they are very well-matched. When the four aquamancers arrive it is very interesting and sometimes hilarious to follow Koranen’s courting adventures in discovering who his destined bride is. But as soon as he discovers that Danau is the one the focus of the story shifts to the fixing of the desalinator (a machine that provides the isle with fresh water).

There are now 3,000 people living on the isle and they all need fresh water. The plans to create an incipient kingdom are coming along nicely with lots of practical problems of course. And so we get a lengthy description of every detail that has something to do with the desalinator or the plans for Nightfall. This is where the story slows down, all the other characters fade into the background while we watch Koranen and Danau fall in love and their attempts to fix the desalinator. The problem I had from this point on with this story was that the romance plotline did not work for me. It was too sweet and I missed the raw passion and intensity that one would expect from two people who both had to do without love for so long. Furthermore Koranen was too much the gentleman and he gave in to Danau too many times. I did not feel the connection with them the way I did with other couples in previous parts of this series.

Another thing you would expect while reading the last but one part in this series is a serious further development in the ongoing plotline, but there really isn’t any serious development going on. Yes a few pinpricks here and there regarding the attempt to resurrect the Convocation of the Gods and a murder takes place, but these mini plotlines are not deepened enough and therefore do not add anything to the story and that is annoying. The romance part is not strong enough to counterbalance the lengthy descriptions of fixing the desalinator and the lack of serious developments in the ongoing plotline.

Fortunately we can count on matchmaker Morganen to put in a frequent appearance. His interactions with Danau regarding a dress are gawky and hilarious. Kelly is also a force to be reckoned with, but especially in the second half of the book I miss the banter between the other brothers. The three other aquamancers spice up the story, they all have their own disposition. Reuen is a real bitch, Chana is a real flirt and Amati is gentle. Koranen sure has his work cut out for him in his dealings with them!

So this story was definitely not what I expected and it did not knock me off my feet. For me it lacked certain intensity and the descriptions of things were too lengthy for my taste. I did not feel the emotional connection with the characters and I missed the action between the brothers. To me it feels like this part is too isolated from the rest of the series, it was an enjoyable read but nothing more. I do hope Jean Johnson is going to end this series with a phenomenal bang; the Corvis brothers certainly deserve that!