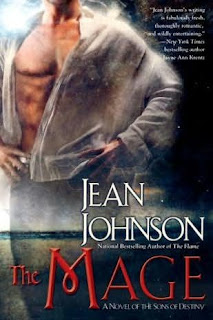 “The Eight Son shall set them free:
Act in Hope and act in love
Draw down your powers from above
Set your Brothers to their call
When Mage has wed, you will be all.

Eight brothers, born in four sets of twins, two years apart to the day – they fulfill the Curse of Eight Prophecy. Though no longer trapped in exile, their growing family faces new problems. The worst of those troubles now falls upon the last of the Sons of Destiny…

Hope, Morganen's foretold bride, has finally arrived on the island. She hasn't been telling the full truth about herself, and the consequences will stretch further than even she anticipates. Just as Morgan gets used to Hope's Revelation, new enemies arrive on the Isle, seeking to steal away the brothers' chance at creating a new nation. During the attack, an old foe resurfaces and strikes amid the confusion, kidnapping the final bride-to-be.

Either Morg will rescue Hope and help his family complete the Prophecies of the Seer Draganna and the last Duchess of Nightfall, carving a new kingdom in the process...or their enemies will be free to slaughter them all....”

From the start it was clear that this series would only be eight parts long and with the release of the Mage the end of the Sons of Destiny series is finally known. Therefore with mixed emotions I picked up my copy of The Mage, I really wanted to know Morg’s story because he is one of my favorite characters in the series and of course how the series would end. At the same time I felt a bit sad because it was also the last time I would return to Jean Johnson’s world, Nightfall Isle and those sexy twins.

The story begins with a flashback, we get to know Hope better (Morg’s destined bride-to-be), who she really is and how she met Kelly. As some readers might already have guessed, Hope is not from Kelly’s world. This flashback covers a time period of five years, the years that Hope spent on Earth and explains how she got there.

Hope is actually the Duchess Haupanea of Nightfall who lived 200 years earlier on Nightfall and then magically disappeared. Now that she is back she has no intentions to claim her Duchy again, she wants to be a chocolatier. It is hilarious to read how she and Kelly devour their chocolate while the others don’t even know what chocolate is. Hope is levelheaded, practical and smart but also a bit insecure for once again she has to start her life all over again. First on Earth and now on Nightfall, for the Nightfall she once knew is gone. She also used to be a Seer for the God Nauvea, but it looks like her Goddess has forsaken her.

As the youngest brother, Morg has some insecurities of his own; he feels he is just plain looking in comparison with his brothers. He is the even-tempered one, the reasonable one, the diplomat of the family, except when it comes to Hope he cannot think straight and is jealous. He is in love with her but is astonished when he discovers who Hope really is and all of a sudden he feels like he doesn’t know the woman he loves at all. He feels hurt that she did not take him into her confidence about something so significant as who she really is. Hope has to make up for that, but he soon finds out that she still is the Hope who he fell in love with.

The Mage is by far the most romantic part of the series. For two-third of the story the courting between Morg and Hope takes center stage, there is lots of witty banter going on between the two of them that made me smile, the incident with the shorts is hilarious and Hope gives Morg a piece of her mind about it. The love scenes are provocative erotic and sensual, they involve a lot of food and liquid chocolate and they made my heart beat faster and faster. What woman wouldn’t want to trade places with Hope when Morg licks off the chocolate from her body! These scenes certainly put my imagination in overdrive.

“Hope found herself quickly overwhelmed. Morganen didn’t just kiss her as a man who wanted a woman; he kissed her as if she could give a drowning man his breath, a starving man his food.”

“Well, am I as good as chocolate? Or am I even better?”

The one thing I noticed immediately is that there is a lot more interaction between the characters and less lengthy descriptions of certain things than in part 7 The Flame. The oh so familiar bickering between the brothers, their typical humor and rivalry is uplifting. All the characters we come to love and know pass in review, but the spotlight really is on Morg, Hope and Kelly. The witty banter between the characters, the humor and the love scenes make this story a fluent and fast-paced read.

After 200 pages the pace of the story changes and the overarching plotline takes over. It is in the last part of the book that all the plotlines come together and get unraveled. Basically the grand finale of the Sons of Destiny series is split in two. An old enemy resurfaces suddenly and kidnaps Hope, time is running out and now Kelly has no choice then to send Morg to his old homeland Katan to diplomatic solve the issue and to get Hope back safely. Only Katan does not co-operate and now we get to see how powerful Morg really is. At the same time Kelly has to start the resurrection of the Convocation of the Gods to get the approval of the Gods to become an incipient kingdom. There are too many schemes and attacks going on to delay it any longer.

But for me the end was not the big bang I was waiting for. It is not spectacular; all the plotlines come together and get unraveled neatly. The convocation of the Gods is funny and witty, it is quite a happening for all Nightfallers, it is Nightfall’s history in the making. But the end is too smooth; all the threats from the past are solved to simple. Yes, it is all obvious and it all makes sense but for my taste is it solved too easily. The other thing I struggled with was that in the end Morg became more and more interesting and that his new found position in life raises more questions for me than answers. The entire end is just not spectacular enough to satisfy all my cravings, it would have been nice to read an epilogue in which we return to Nightfall a couple of years later to see how everyone is doing.

Though perhaps I put my expectations for the end too high, The Mage is still a great and enjoyable read and Morg & Hope are fantastic characters. The story is rich and layered because of the storylines and previous parts in the series, the characters have grown more rounded with each part and I will miss all of them! Jean Johnson has created a world that is unique and entrancing. The Corvis twins have earned their permanent place on my bookshelves and I will always have a soft spot for Jean Johnson’s Sons of Destiny series.