Meredith Duran - Bound By Your Touch 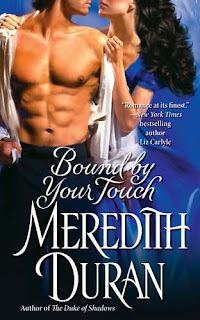 “Beauty is as beauty does…

Silver-tongued Viscount Sanburne is London’s favorite scapegrace. Alas, Lydia Boyce has no interest in being charmed. When his latest escapade exposes a plot to ruin her family, she vows to handle it herself, as she has always done. Certainly she requires no help from a too-handsome dilettante whose main achievement is being scandalous. But Sanburne’s golden charisma masks a sharper mind and darker history than she realizes. He shocks Lydia by breaking past her prim façade to the woman beneath… and the hidden fire no man has ever recognized. But as she follows him into a world of intrigue, she will learn that the greatest danger lies within – in the shadowy, secret motives of his heart.”

Meredith Duran’s debut novel, The Duke of Shadows, blew me away and is considered one of the best historical reads of 2008. That story grabbed me by the throat and made quite an impact on me. The writing, the characters, the plot, I devoured every word on every page. The expectations for her next story were high and I knew the minute I got my hands on Bound by Your Touch that everything on my ridiculous huge to-be-read pile had to budge for this book. When I read the synopsis I had my doubts if this story could equal her debut novel, after all Miss Duran had set the bar so high with that one. So a bit skeptical, but open minded, I begun to read.

And of course my doubts were put to rest for Meredith Duran wrote yet another fantastic story. Lydia Boyce is considered a blue-stocking and a spinster. She does not possess the great beauty her two sisters have and has thrown herself into her father’s business, as his representative she sells Egyptian artifacts to support their family and her father’s research in Egypt. She adores her father and trusts him completely. Then at a meeting where she tries to raise funds for her father’s research the viscount of Sanburne steals her spotlight and from that moment on her life will never be the same again.

James, viscount Sanburne, has but one goal in life, to antagonize his father as much as possible. He always wants to outwit his father with ancient artifacts and now some blue-stocking is telling him his newest artifact he solely bought to outdo his father is a fake. James is a jaded man, seen it all, done it all. He is more drunk than sober and nothing can hold his interest. But Lydia piques his interest, keeps him entertained whether she likes it or not. When Lydia realizes that this fake artifact was shipped by her father she must investigate it, but she cannot do that without involving James. At first this is just another game for James to entertain himself, but that soon changes as he truly wants to help Lydia in more ways than one. In the end they both get more than they bargained for.

Miss Duran’s writing is classic, elegant and refined but at the same time she knows how to stir up all those raw emotions that will give you a lump in your throat. Her writing is sometimes lyrical and you could say that this has become a trademark of Miss Duran. It is also fluent and therefore reads like clockwork, there are not many writers who can describe a simple kiss or a love scene the way she does. The way she sketches the first time that James and Meredith make love left goose bumps all over me and I almost forgot to breathe. Those scenes are put to paper with such intensity, and so poetical you forget the world around you.

Bound By Your Touch starts with a prologue that immediately captures your attention. It provides you with an insight why Lydia is the way she is. Here she is laying her heart bare to the man she thinks she loves only to be jilted by him and then to her humiliation he marries her sister. It is a life-changing moment for Lydia. But after this sizzling start it really took me a couple of chapters to immerse in this story and I was afraid that the story could not hold my attention. But I was hooked the moment James and Lydia decide to join forces so they can solve the mystery that surrounds the fake artifact. Their encounters are sassy, hot and breathtaking.

Both Lydia and James got hurt in the past, betrayed. Lydia got ditched and society labeled her an old spinster, so she acts the part accordingly. But James makes her betray her role, her body reacts to him in ways she did not know existed and she realizes she feels more alive than ever but she also cannot shake off her role as an old spinster. It makes her a bit uptight and she struggles to break free from the role society pressed upon her. James also plays the devil’s advocate when it comes to her father’s business but Lydia simply refuses to have doubts, because her father and his business mean the world to her.

Sanburne has it all, the looks, the title and the money and property that come with it. He has this cold war going on with his father; he cannot forgive his father for what he has done. Therefore he plays the rakish son to embarrass and hurt his farther. It oppresses him that one day he has to follow in his father’s footsteps. Lydia is like a breath of fresh air to him and she constantly surprises him. Both Lydia as James grow more balanced during the story, both have issues to cope and deal with, they are like a mirror to one another. They help each other to understand themselves better.

At first you suspect that James is the one who has to come around. However, in the end it is not him but Lydia who has trouble with facing the facts in her naivety. Beneath his rakish façade James is a very strong, honorable and caring man. Lydia helps him to peel back all the layers he has created around himself to numb the pain and to face his demons so he can let go of the past. But she does not allow him to return the favor because she is too headstrong and won’t listen to reason. While James finally figures things out and try to set things right Lydia somehow cannot face the truth. And that annoyed me big time, for she is so smart and is willingly ignoring all the signs.

Their conversations are lively, so full of wit, sarcasm and banter. They are fast-paced and certainly lit up the first half of the story. The second half of the story is much more emotional as of course the relationship between James and Lydia changes into something more meaningful, their feelings grow for one another although they playfully try to hide these feelings. I love the way Meredith Duran portrays her characters, how she interlaces a character-driven love story perfectly with a strong suspense plot. The suspense plot is less impressive and more predictable than the one in DOS, but it still is believable and exciting. Of course there are many additional characters and they all play their part, some obvious and some not so obvious but they all blend into the story.

Bound By Your Touch is another winner. Her elegant and classic, but intense style of writing adds something special to this story. It allows the emotions to scream of the pages, the love scenes are moving and the plot is addictive. After a stunning debut Duran has written a worthy successor that met my expectations. Bound By Your Touch did not knock me off my feet the way The Duke of Shadows did but still Duran’s writing leaves you aching for more. Bound By Your Touch is steeped with historical details; it is emotional and sensual rich. Her characters are rounded and Duran has a gift to capture the romance with her writing so it comes to live.

Duran has become an auto buy author for me.