Meredith Duran - Written On Your Skin 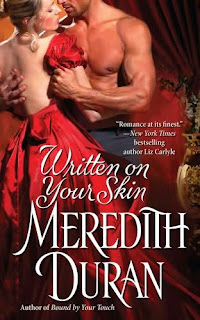 The society beauty who saved his life...

Beauty, charm, wealthy admirers: Mina Masters enjoys every luxury but freedom. To save herself from an unwanted marriage, she turns her wiles on a darkly handsome stranger. But Mina's wouldbe hero is playing his own deceptive game. A British spy, Phin Granville has no interest in emotional entanglements...until the night Mina saves his life by gambling her own.

The jaded spy who vowed to forget her...

Four years later, Phin inherits a title that frees him from the bloody game of espionage. But memories of the woman who saved him won't let Phin go. When he learns that Mina needs his aid, honor forces him back into the world of his nightmares.

In lives built on lies, love is the darkest secret of all...

Deception has ruled Mina's life just as it has Phin's. But as the beauty and the spy match wits in a dangerous dance, their practiced masks begin to slip, revealing a perilous attraction. And the greatest threat they face may not be traitors or murderous conspiracies, but their own dark desires....

Meredith Duran has fast become one of my favorite authors in the historical genre, I love the way she pens down a story, the words are so flowing it reminds me of a beautiful love song. She knows how to blend a passionate and emotional romance with a captivating suspense plotline. When Phin was introduced in Bound By Your Touch I wanted to know more about this tall, handsome but very haunted man. Well I got my wish, but when I finished his story I really had mixed feelings about it. This story did not blow me away like the previous two books of Meredith Duran.

Since the blurb gives an accurate vibe of the story I am not going to write a summary. When I closed the book it bothered me that this story did not blow me away, because I really wanted it too... First of all, this is a character-driven story, Duran always pens down strong characters, characters that grow and heal during the book. Phin I really love, he is hero material, tall, dark, brooding, handsome and mysterious. He was forced to spy in the past but now that he is a member of the peerage, he has left the spying business behind him. However, the past still torments him; even now he never lets his guard down, not even with his best friends.

It is Mina that rubs me the wrong way. I found her annoying from start to finish. I do understand where she is coming from, she witnessed and experienced domestic violence first hand, she vowed to never be suppressed again by a man, now she seeks independence and freedom for herself and her mother. She truly is a strong and smart woman, very sophisticated on the outside but very insecure and suspicious on the inside. When her insecurity prevails she lashes out to protect herself, but does this in a very annoying and immature way, over and over again. She seeks Phin’s help but completely ignores his advice and endangers her own safety because she needs to be in control.

Phin acts rather arrogant and bossy towards her, it scares him that she can break down the walls he has build around him so easily. But he does have her best interests at heart for his honor demands it and he owes her, for she did safe his life once. Mina and Phin’s attraction for each other radiates from the pages, Meredith Duran has written hot and sensual sex scenes, but the bedroom seems to be the only place where Phin and Mina let down their guard and control. I found it very annoying that Mina fought Phin every step of the way, playing games like a child to get her way.

While in Duran’s previous stories the suspense plotline is strong, surprising and thrilling, I cannot say the same for the suspense plotline in Written On Your Skin. It starts very exciting and intriguing in Hong Kong, but fades completely into the background when Mina and Phin hook up again. Their romance and interactions dominate the story, there is a lot of talk about this dangerous man, the villain, but not once does he make a real appearance. At the end of the story there is no big bang and the suspense part ends very weak, like a balloon that deflates slowly.

I cannot say that Written On Your Skin is a bad story, not at all. Meredith Duran’s writing is melodious and compelling, that alone raises the story to a higher level. I love her writing, it is rich in detail and every page is steeped with passion and emotions. The sex is page-melting and her characters are profound and deeply passionate. This story did not blow me away because Mina’s character could not charm me and imo the suspense part was very weak.

However, when Meredith Duran’s next release Wicked Becomes Her hit the shelves I will devour it on the spot for her writing is addictive, beautiful and breathtaking.
at 2:45 PM