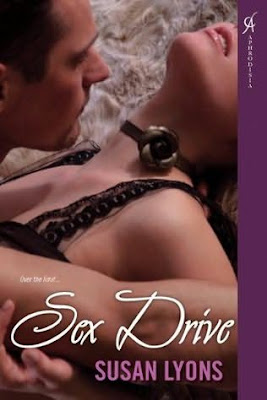 Prof. Theresa Fallon’s ex-husband gave her good reason to swear off men. But when, on the long flight from Sydney, Australia, to Vancouver, BC, she’s seated beside one of Australia’s ten sexiest bachelors, she has reason to question that decision.

Thriller writer Damien Black is very attracted to the sexy but standoffish professor, and it’s a challenge to persuade her to enjoy his special brand of in-flight entertainment. From there, it’s not all that big a step to enjoying a stopover together in Honolulu. Not to mention, a little sex on Waikiki Beach!

To the prof’s surprise, her sex drive hasn’t disappeared. It was only waiting for the right man to awaken it, and Damien is definitely that man. And the same very well might go for her heart…

For the cynical Theresa and the far-too-experienced Damien, this journey is a special one. To their mutual surprise, they’re on a wild ride to love!

I never read any of Susan Lyons books before, but when the request from ROOB came to review Susan Lyon’s Sex Drive I could not say no. Since I am warming up fast to erotic contemporary romance with a touch of chick lit, this sounded like a fun read. I mean, who doesn’t want to be seated next to one of Australia’s ten sexiest bachelors on a long flight?? Of course I have never been that lucky, I always ended up being seated next to snoring, grumpy old ladies. So I opened the book and the story captured me immediately, for this is one hot read!

This story starts in a shop at the airport where Prof. Theresa Fallon is searching for bridal magazines, her baby sister is getting married and she promised to make all the arrangements necessary for a lovely wedding. So as a real academic she is digging up all the information she needs to make this wedding a success when while talking to the clerk she puts her foot in her mouth and has a real embarrassing moment with this hot guy who stands behind her in the line. This hot guy turns out to be her ‘neighbor’ on her long flight home. Damien Black who is seated next to her is immediate intrigued by Theresa even if she is giving him the cold shoulder. Although the pretty air hostess almost literally throws herself at him, he finds the fact that Theresa does not recognize him and her intellectual look far more appealing and immediately starts his seduction.

Sex Drive is a slow-paced and character-driven story. Slow-paced and character-driven because it mainly revolves around the development of Theresa’s and Damien’s relationship and their characters, but they have enough fireworks going on to keep your nose in the book. Theresa is a real career woman, all work and no play. She is very responsible and serious. She has the annoying habit of voicing her thoughts and she is a perfectionist who is impatient when others don’t measure up to her expectations. She is also vulnerable when it comes to men; she does not have a lot of experience in the love department, sees herself as a plain Jane and was betrayed by her ex-husband who used her brain to climb the academic ladder.

Then you have Damien Black, what to say about him? He is hot! He is the hot-sex-on-a-stick type of man; he turns women’s heads everywhere. He can have any woman he wants; he is a celebrity author of paranormal thrillers and is one of the sexiest bachelors in Australia with his tattoos and pitch black half long hair. He is part aboriginal and is very comfortable in his own skin; he knows how to deal with women, it comes natural to him. He is also very likeable and therefore it is impossible not to fall in love with him, he is delicious!

I must admit that I was a bit skeptical about the concept of this series, three sisters finding true love on their way home to their baby sister’s wedding. My main concern was the timeframe for setting up a believable romance. This whole story takes place in approximately three to four days; it made me wonder if Susan Lyons could pull it off to create a believable romance within this timeframe. Theresa and Damien are complete opposites in every way, however, we all know opposites attract. But I did buy into their romance, because they spend all their time together, on the plane and during their stopover in Honolulu. Besides hot sex they have many in-depth conversations and discover that they have a lot in common. What started out as a playful one-night flight adventure turns into something more meaningful and deeper during their stopover in Honolulu.

Little by little they tell each other bits and pieces of their lives. They provide each other with fresh insights, mostly about themselves, simply by speaking out loud their observations about one another. Therefore Theresa’s and Damien’s characters are very rounded. For example, Theresa points out to Damien that he should use his celebrity status to raise awareness for the injustice the aboriginals have suffered since he is part aboriginal himself. Damien turns her words back on her, claiming she only publish her articles in academic journals instead of telling the “real” world her points of view and so reach a larger public. They challenge each other in many ways and they realize that they both need to make some changes so they can grow into better, whole persons.

The sex scenes are scorching hot; at first they are raw and full of lust. Like the ones on the airplane, while it is obvious that Damien already is a member of the Mile High Club and knows exactly how and where to have sex on a plane, Theresa has never done anything like this in her life. Further in the book they change when their affections for one another grow and instead of just having sex they make smokinhot love. The one thing I like about these scenes is that you see the change in Theresa, she gets more comfortable with her own body by the hour and that is thanks to Damien.

Every chapter is told either from Theresa’s point of view, or Damien’s, this gives you a good insight in Theresa insecurities and Damien’s confusion for falling in love for the first time for real. The only secondary characters that pass in review are two of Theresa’s sisters and her parents, but only at the end of the book. Though it is very clear from Theresa’s musings that the four sisters are very different they do have this family bond.

From the first to the last page Sex Drive is one hot read! Flying has never been so much fun! I thoroughly enjoyed myself and was fanning myself from time to time, I am looking forward to read about the wild rides of Theresa’s sisters!