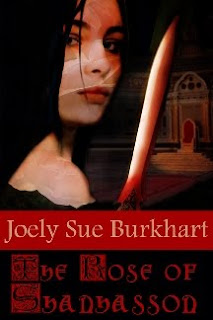 When Joely Sue Burkhart asked if anyone was interested in reading and reviewing the Rose of Shanhasson I raised my hand immediately, I liked the blurb but I forgot this tiny little thing… out of all genres, fantasy is my least favorite one. And although this story is labeled as a fantasy romance (and I heart romance), I avoid this genre as much as possible. I dread the extensive world-building and lengthy descriptions of everything and nothing that slows down the pace of the story. It is just not my thing. And when I read the first line of the book “Blessed Lady Above, why have you forsaken me?” I had this misgiving that I would be in trouble with this one.

But no! This story blew me away almost from the start. How to write a review of the Rose of Shanhasson when my heart still throbs? How to write a review that will do this story justice? Joely Sue Burkhart has created a different, unique world with different realms; each upholds their own traditions and have their own rituals. A world where everything revolves around political intrigues, power and hidden agendas. In this world I met Shannari, the last daughter of the Blessed Lady, heir to the Rose Crown and High Throne, Rhaekhar, warlord and Khul of the Nine Camps of the Sha’ Kae and Gregar the Shadowed Blood and former Death Rider. Joely Sue Burkhart does not need lengthy descriptions to introduce the reader to the fantasy world of the Blood and Shadow series, gradually the characters introduce themselves and their realms.

As last daughter of the Blessed Lady, Shannari is destined to wear the Rose Crown and to be the next High Queen of the Green Lands if she can restore her crippled magic. She dreams of uniting the Green Lands, they are now scattered and political intrigues run rampant. If she fails or dies a dark prophesy awaits her people, then Lygon, Lord of Darkness will be free again to rule the world. Shannari is surrounded by enemies; she seeks an alliance with other realms to help her people. But the other realms have their own agenda’s and no one is willing to help her. She is engaged to Prince Theo; he wants the High Throne for himself, he won’t share it and sees her as a threat. Over the years he has send many assassins to kill her, so far all have failed.

Shannari is one of the three key-characters in this story; we follow her on her trying journey to fulfill her destiny. She is persistent and loyal to her duties and destiny. But shadows hang all about her, a sign of great evil. She stands her ground in the crisscross of political scheming and battle in a world that is dominated by men. She has learned the hard way not to trust anyone but herself and was betrayed by the man she once loved, consequently she has given up on love, she thinks people who believe in love are fools. But the Blessed Lady has provided a way to help Shannari accomplish her destiny, although she does not know it.

It is here that Rhaekhar and his Blood enter the story at page ten. This is also the moment that my mouth went dry and my heart started to throb, for Joely Sue Burkhart knows how to create drop dead gorgeous men with honor, rituals and traditions. This is how she describes Rhaekhar:

“The warlord stared back at her, his golden gaze strangely intense. His long brown hair was intricately braided at each temple, heavy with colored beads and rings. The only clothing he wore was a green cloth wrapped about his hips, leaving his legs from mid-thigh completely bare. His immense chest gleamed like polished bronze in the sunlight crisscrossed with white scars. In fact, his entire body bore such fine lines, all except his chiseled face. Bands of gold, leather and horsehair encircled his biceps. A broadsword nearly as long as she was tall hung across his back, thankfully sheathed.”
With details like this Joely Sue Burkhart kept my eyes glued to the pages.

Rhaekhar is the Khul of the Nine Camps of the Sha’Kae, he has come with his men and Blood to the Green Lands because of a vision he had as a young lad. The Great Wind Stallion promised him he would have a love like no other, the Rose of Shanhasson (Shannari). He came to collect what is his and won’t leave without her. He defeated Shannari in battle and now she is honor bound to go with him. But all of the Nine Camps of Sha’Kae are scheming for more power, and bringing an outlander to their Camps might just split the Sha’Kae asunder.

Rhaekhar is cold, calm and controlled in battle, he always has a grip on his emotions. He believes in all those things that Shannari does not, love, trust and loyalty. Shannari is Rhaekhar’s Na’lanna (beloved); they share this bond that allows them to share their hearts and minds through blood. The more blood they share the stronger the bond. And though Shannari fights Rhaekhar every step of the way she cannot deny the strong, instant chemistry between them.

The third key-character is Gregar; he is one of the nine Blood. The Blood have sworn their lives to Rhaekhar to protect him. They share a blood bond by sacrificing blood; they considered this a great honor. Each one has a special gift, Gregar can wrap the cold Shadow of Death about himself and disappear, he also used to be a Death Rider. He does not get along with Rhaekhar’s nearest Blood Varne, they are constantly at each other’s throats and are very competitive. Their bickering is intense but also hilarious. As a Death Rider he has this compelling urge to sacrifice Shannari’s blood to their God Vulkar because he feels drawn to the shadows that hang about her, as Rhaekhar’s Blood he feels the need to honor and protect her, therefore he is constantly at war with himself, and his growing feelings for her do not help either. This dark-haired warrior is wicked, has a sharp tongue but is loyal to the bone to both Rhaekhar and Shannari. He is a complicated, mysterious character and there is still so much more to unravel.

“If Khul or I ever offer blood, you will taste it, without question or hesitation. Any time, any place, no matter who watches.”

“It will honor us greatly, Shannari. Everyone in Camp will recognize such a great honor. Tasting blood is not a thing of darkness here, but of honor.”

Joely Sue Burkhart beautifully pens down the beginning of a triangular love affair. First of all Rhaekhar has to conquer Shannari’s heart and trust which is almost like an mission impossible, except that for Rhaekhar nothing is impossible. Then by accident or fate Gregar and Shannari create their own blood bond, Shannari is not ready to accept that she now has a bond with two men, she feels guilty towards Rhaekhar. But both men give Shannari the space to discover things on her own, helping her to accept the things as they are. The bond the two men have with Shannari only grows stronger from chapter to chapter. The romance and sexual tension radiates from the pages, the love scenes between Rhaekhar and Shannari are hotter than hot, the chemistry between Shannari and Gregar smolders and with each page it grows till Shannari can no longer deny the deep bond the three of them share.

While I was all wrapped up in the erotic entanglement of Shannari and her two warriors, the rituals and traditions of the Sha’Kae, I almost forgot the dirty battle for the High Throne. Shannari’s journey to fulfill her destiny has faded a bit into the background but many characters connected to her destiny pass in review. Shannari’s father, the king, is not a very strong leader, he means well but makes the wrong choices, yet his heart is in the right place. The Duke of Pella is a dangerous man, he is only looking for ways to gain more power and to enrich himself. But it is Prince Theo who raises the hair on my neck, he is a real pervert but more to the point he is used as an instrument by the Lord of Darkness to release evil. So at the end of the book the battle for the High Throne has only just begun and many questions are still unanswered, making me want to devour the second part in this trilogy, The Road to Shanhasson on the spot.

Joely Sue Burkhart creates a rich and layered story by interlacing different elements like world-building, characterization, fantasy, suspense and romance perfect to a tee. I love her writing, it is fast-paced, smooth and easy to picture. It is like watching a movie. Her jump-off-the-pages characters are profound and her warriors addictive. The darkness and shadows of evil are perfectly mirrored in the characters that are corrupted by power. The storylines are fresh and original and I loved the traditions and blood rituals of the Sha’Kae, but perhaps they do not fit within everyone’s comfort zone. The provocative erotic scenes raised my blood pressure to the max; there really is not a thing in this book that I did not like!