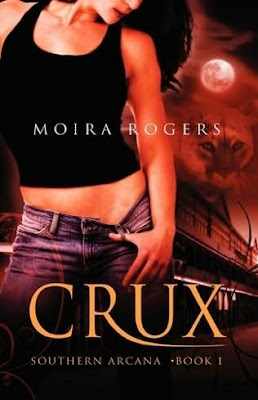 “To find her destiny, she must trust him with her life - and her heart.

Jackson Holt makes a decent living as a private investigator in New Orleans, home of one of the largest underground supernatural populations in the United States. He and his partners have never met a case they couldn't crack until a local bar owner asks him to do a little digging on her newest hire.

New Orleans is the fourth destination in as many months for Mackenzie Brooks, a woman on the run from a deranged stalker. After all, any man who shows up on her doorstep claiming to be her destined lover has more than a few screws loose. But crazy doesn't explain why he always finds her no matter how far she runs.

When her well-meaning boss puts a PI on her case, Mackenzie comes face to face with the incredible truth: magic is real, and whatever spell has kept her hidden and separate from the paranormal world is rapidly deteriorating.

With time running out, she has no choice but to trust Jackson as he struggles to uncover the truth of her past - and her destiny.”

Mackenzie Brooks lived a normal “human” life until she met Marcus Foster and his rogues. He stalks her and goes on and on about being chosen for a higher purpose. She has no clue what he is on about but knows she is in danger, so she does the only thing she can do, she flees. She ends up working as a barmaid in New Orleans; she is scared, lonely and trusts no one. Nicole Peyton, Mackenzie’s new boss, knows something is going on with her new barmaid so she asks her good friend Jackson Holt, a private investigator, to check her out. Jackson and Mackenzie share this instant attraction for one another. Just when Mackenzie thinks that maybe she has found a new place where she could settle down and start over, Marcus and his men find her again and they make it clear that they stop at nothing to get what they came for. Mackenzie has no choice than to trust Jackson, Nicole and her other new made friends, soon she discovers that magic and shape shifters really do exist and that she is not as human as she thought she was...

When Moira Rogers asked on Twitter if anyone wanted to review Crux I did not hesitate. Crux is the first part in her new Southern Arcana series and I really liked the blurb. Immediately I got pulled into the story, Moira Rogers writing is very fluent and easygoing. I like the way the story unfolds, at first the story is slow-paced, together with Mackenzie we discover a whole new world full of magic and shape shifters. Rogers does not overwhelm you with an extensive world-building; all the information you need is interlaced in the dialogues between the characters and the characters themselves. Page after page, with Mackenzie you will learn more about this new, wonderful world and immerse even deeper into this story. When Marcus appears on the scene and the reasons behind his stalking Mackenzie are known, the story becomes fast-paced and is packed to the rafters with action.

It turns out that Mackenzie is a cougar shifter, cougar shifters are very rare. She did not know she was one because of a spell. I like the way Mackenzie changes, she is scared and alone, she always had the feeling she did not fit in until she met Nicole, Jackson and the others. She feels right at home with them. When she finds out she is a shifter certain things from her past fall into place and slowly she grows into this self-confident, whole, young woman. Of course Jackson is there to help her every step of the way. Now what to say about Jackson? He is my kind of hero! He is easy-going, gentle, loyal to his friends, he is good at his job, easy on the eyes and can cook. What more can a girl ask for? Moira Rogers made me fall in love with him right from the start.

The love scenes are hot, passionate and sexy. I had my doubts about the attraction between Jackson and Mackenzie at first, to me it felt a bit rushed, a little too much too soon. That changed when the speed of the story changed, certain pieces fell into place and it all made sense. Another thing that makes Crux such a great read is the humor, the bantering between the characters, I loved it, it made the characters even more appealing and it made the story even more fun to read.

The cast of secondary characters is fascinating. Nicole, Derek, Alec, Kat, Michelle and Marcus, you will love them instantly. They are all different, they all have their own unique voice and background, I was rooting for all of them, yes even for Marcus. They are so supportive and friendly to Mackenzie, a woman they hardly know yet warmly welcome in their midst immediately. Of course the person they are up against is really powerful and creepy, he stops at nothing to achieve his goal; I disliked him from the start. I can understand his motives but in trying to achieve them he became ruthless.

So what else to say about Crux? It is an addictive read from start to finish. For me it is a combination of things. First of all, Moira Rogers writing is very smooth; before I knew it I was halfway through the book. The world Moira Rogers has created is refreshing, new and does stand out in the crowd of the many other paranormal series. I love the characters and the way they develop, they truly are a charming group. Miss Rogers is quite a tease because I picked up certain undercurrents between the characters, very interesting to read and it makes you eager to learn more about them. And I love the storyline and the pace of the story, the romance and the action are perfectly in balance, the end totally satisfied me and at the same time I wanted more because I did not want to leave this world. Now I have this fascination for the other characters, I need to know their stories!

Crux is titillating, witty and packed to the rafters with sexy and unforgettable characters. So if you like shape shifters, romance and magic Crux is a must read!