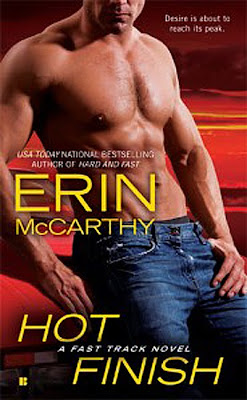 Don't know about you gals, but I think this cover is hot! And I love it that the concept of the cover is the same as the first two in this series.

Hot Finish by Erin McCarthy is the third part in her Fast Track series, it is Ryder's and Suzanne's story. It will be released on August 3, 2010. I so heart this series that the wait for Hot Finish is pure torture!!! Ryder and Suzanne already share a history together and there were some hilarious scenes between them in the previous two parts, like the pie incident!

Here is the blurb:

Not all marriages last forever…

Suzanne Jefferson is broke, which is why she’s given up charity work for wedding planning. Fortunately, she has a high-profile client—and best of all, he’s paid in advance. There are just two teensy problems: The bride is a bona fide bridezilla, and Suzanne’s ex-husband is the best man. At least she thought he was her ex-husband…

Two years after their marriage fell apart, stock car race driver Ryder Jefferson still can’t stop thinking about Suzanne. Which is why he isn’t too upset that, due to a glitch, the two are still technically married. Now he’s imagining easing Suzanne’s woes by satisfying her needs in the bedroom. After all, that’s the one room they never argued in. Besides, with wedding bells ringing all around them, Ryder is wondering if—even though they’d quit the race a few laps too early—they can still come on strong with a big, romantic finish...

And let us not forget the previous two hot covers!

Let's start with the cover and the story that made me fall in love with stock car drivers! Flat-Out Sexy. 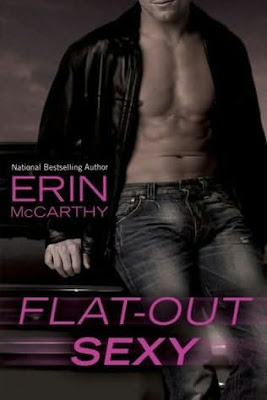 Blurb:
“She met him at the racetrack…

…which was the last place Tamara Briggs wanted to find a man. Even a deeply intriguing, seductively sexy man like Elec Monroe. Tamara is a single mother now after losing her daredevil husband in an accident – and she’s not about to get involved with another driver and put her kids or herself, through that again. Besides, Elec is young enough to be her… younger brother.

Now things are moving a little too fast…

But he sure does get her heart racing. And after she is tricked into a blind date with him, Tamara gives in to her passion. Things screech to a halt, though, when he asks to meet her children. Whatever happened to wham-bam-thank-you-ma’am? Suddenly Tamara has to decide how big a risk she’s willing to take to experience the thrilling, terrifying power of true love…”

And part two in this fast-paced series is Hard and Fast! Blurb:
“An experiment in romance…

New to Charlotte, North Carolina, stock car racing country, graduate student Imogen Wilson meets Ty McCordle, a driver who inexplicably has her pulse racing. After an encounter at the track with a woman whose main goal in life is to marry a driver, Imogen realizes she’s hit on the perfect topic for her sociology thesis. If she follows the rules on how to get a man, can she steer her way into the hearts of the drivers and establish their dating- and mating-patterns?

… that’s testing the limits of passion.

Although sexy and reckless Ty is the ideal test subject, Imogen knows she can’t pursue him for the sake of science. Yet he’s the one who’s chasing after her, and Imogen realizes that she actually wants to be caught. A Southern gentleman like Ty won’t disappoint – he will satisfy her curiosity and make all the risks worthwhile…”

My reviews for the two previous parts in the Fast Track series:

And the good news is that more books are planned in the series!

But for now I am waiting impatiently for Hot Finish, august 3 cannot come soon enough for me.

Happy reading everyone!
at 2:54 PM