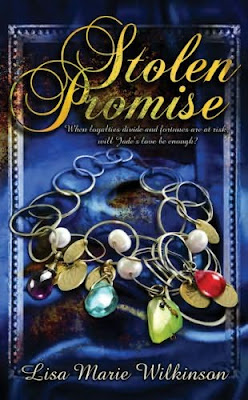 “At the Lowara Gypsy Camp outside Windsor, England, in 1806, a young woman will lose her independence in a common marriage market transaction. Jade knows she is promised to Dimitri, a possessive abuser.

When her father sends her to the arms of another man, Jade finds only slight consolation . . . until she encounters her intended. Evan Dark is a half-Gypsy gentleman—nothing like Dimitri. Caught in a battle between tribes, Jade is a piece of property, the ideal runaway bride. In order to escape Dimitri’s clutches, she sails for Charleston with Evan as his indentured servant. But, engaged to another woman as part of a plantation merger in South Carolina, Evan’s affiliation with Jade can never be more than professional.

Evan must choose between fulfilling his obligation to marry his betrothed or accept his overpowering passion for Jade, a woman his matchmaking Gypsy grandfather deemed the perfect Romany wife. In nineteenth-century America, where insincere tradition meets old money and arranged matrimony in upper-crust society, Evan faces the most difficult decision of his life: Remain loyal to the fiancée he holds in commitment . . . or be true to the lover he holds in his heart.”

Stolen Promise is the second novel of Lisa Marie Wilkinson and from page one it demanded my full attention for this story takes off full steam ahead! Lisa Marie Wilkinson threw me back in time to the early 1800’s, with a great eye for historical detail she took me on a touching journey to the Romany culture with its many beliefs and customs and the every-day-plantation-life of the crème de la crème of Charleston’s society.

With Evan Dark Lisa Marie Wilkinson created a classic hero, he is strong, honourable, dutiful and reliable. As the heir to a large plantation he is used to give orders, but when he finds out his real father was a gypsy he sails to England to discover his roots and learn more about his Roma background. He meets his grandfather who insists he takes a Romany wife from another tribe so an alliance between the tribes can be made. As a man of honour, Evan friendly declines the offer and intends to leave for America where his fiancée and duties are waiting for him, and then he runs into Jade.

Jade is a beautiful, strong, young woman who is trapped in the traditions of the Romany culture. A Romany woman has no rights; she obeys and accepts her fate. Jade has known for a long time she is supposed to marry Dimitri, an abuser. But she refuses to accept this; she wants a better life for herself and her younger sister, away from everything that has to do with her own culture. So she runs away, gets into trouble and Evan saves her. He insists on taking her back to her camp.

On the way back to the camp Evan and Jade experience several charged, breathless moments of undeniable attraction. It also becomes clear that Jade has lived an isolated life in the gypsy camp; she knows little of life outside the camp. Trouble always seem to find her. But she is a real survivor, she is smart and spirited. The gypsies have their own traditions and law, and when they blackmail Evan to uphold the arranged marriage, he has no choice than to play along so he can escape later. After all, a gypsy marriage has no value outside the gypsy world. He is very angry when he finds out that it is Jade who he has to marry, he is convinced she has entrapped him. But he also cares and worries for Jade, he does not like to leave her with Dimitri, so when she makes him an offer to be his indentured servant if he takes her and her sister with him to America he cannot refuse.

And so their fate stays entangled, Evan takes Jade and her sister to South Carolina. Now both sisters have to learn to live in Evan’s world. Evan is a true gentleman, he is very protective of Jade and her sister. Their smouldering attraction keeps growing although both know it can never be more. But Evan starts to have doubts about his upcoming marriage, due to Jade he starts to see his fiancée in a different light. He does not voice his thoughts out loud because he knows his duties; he is expected to marry his fiancée Glorianna so that their two plantations can merge. But he cannot overlook certain things that Glorianna has done or deny his passion for Jade and the way she makes him feel either. He is torn between his duty and his heart.

Wilkinson’s writing is laid-back and smooth, the combination of the romance, suspense, characters and the pace of the story see to it that the story is perfectly in balance. I like it that Jade and Evan meet each other early on in the story so you see their attraction for one another slowly grow into something more meaningful. Both Jade and Evan’s characters are well-rounded; it is very clear what makes them tick. I also enjoyed learning more about the Romany culture, Lisa Marie Wilkinson vividly depicts the gypsy’s way of life and their traditions, and this provides you with a better insight into the gypsy world.

The supporting cast of characters is a mishmash of a charming kid brother, a loyal sister, a brother without a backbone and one malicious viper. All play their own part and add depth to the story. I especially liked his younger brother Patrick, although he is the youngest, he knows exactly how Evan feels and tries many times to push Evan on the right track. The dialogues are witty, full of humour and leap off the pages, especially the ones between Jade and Evan and Evan and his brother Patrick.

“What did you do?” “I placed a curse on him.” Jade replied. “You cursed him with the recipe for hedgehog soup?” ““He should have learn to speak Romanes”, Jade said with a shrug.”

With Stolen Promise Lisa Marie Wilkinson delivered a romantic but fast-paced story set against the backdrop of the gypsy world and the Southern hospitality of South Carolina. It is fluently written and researched with profound characters. This warm, dynamic and spirited story will keep you reading until the very last page!