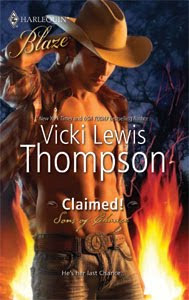 Following a dream brought Josie Keller to Shoshone, Wyoming. Following her heart brought her plenty of great sex with good-time cowboy Jack Chance! She was head over heels for him. until he left her.

Stay with one woman? Not a chance! Then why does Jack miss Josie like crazy? Had their relationship been more than just incredible sex?

Little do Josie and Jack know that a plan's afoot to get them back in the saddle.together. And once there, it's not long before they're burning up the bedsheets again!

But the past is never far away. Before it catches up with them, Jack has to decide if he's going to stake his claim on Josie, or lose her forever..

When Josie Keller fell in love with Wyoming and decided to move there, she bought a bar, the Spirits and Spurs, and worked hard to make it a success. She met Jack and fell head over heels in love with him, thought he was the one. With Jack Josie had lost all her inhibitions, she felt alive and beautiful. But after 6 months of blistering sex and bliss Jack had walked away, leaving her heartbroken and alone.

Up to ten months ago Jack Chance had a good life; he loved his work at his father’s ranch and could not keep his hands off his girlfriend Josie, spending every free moment he had with her. But everything changed when Jack’s father died in an accident. Riddled with guilt, Jack ended his relationship with Josie and as the eldest son he was left in charge of running the ranch, a job he never wanted.

His father’s death still weighs heavily on his broad shoulders when fate brings Jack and Josie together once more. Jack’s brother is getting married on horseback and Josie is the maid of honour. There is just one little problem, Josie can’t ride and needs riding lessons, Jack happens to be the right person to teach her. It does not take them long to stir up their passion again but this time Josie demands much more from him than just mind-blowing sex and Jack is not sure he can give Josie what she seeks…

Claimed is part 3 in the Sons of Chance series by Vicki Lewis Thompson. Claimed is playful and reads like clockwork. Miss Thompson does an excellent job in taking us on a journey to a typical little town in the middle of the country side. Both Jack and Josie are loveable characters and all the ingredients were there to create a powerful love story, yet I found something was lacking. This story lacked emotion, it did not sweep me off my feet and though I found Claimed an enjoyable read the story missed depth.

Jack obviously has some issues with his past, his mother left when he was a toddler. Now many years later he still is not able to call his stepmother mom, he calls her Sarah while he knows this pains her. He always has to be the one to end things; he never lets anyone come close because he never shares his emotions or his thoughts.

Josie is a really nice and social character, works hard but was really hurt when Jack ended what they had, saying their relationship was just sex nothing more. When Jack returns in her life she vows to keep her distance, yet one look at his fabulous body during their first riding lesson and she surrenders to her passion for him. This while she knows he has not changed a bit.

After all that has happened, Jack and Josie just pick up their sexual relationship. I loved the sex scenes; they were passionate, hot, playful and witty. But I do not understand that Josie surrenders so easily knowing that Jack hasn’t changed. That does not mean that Jack is a complete jerk, he is an honorable and sexy man, he just does not handle things with Josie very well. When she realises that Jack still has the same issues and refuses to open his heart for her, she forces his hand, either he opens his heart for her or she walks.

Then almost in the blink of an eye Jack changes, in a grand gesture at his brother’s wedding he shows Josie he can change and declares his love for her. And though the gesture was romantic and beautiful it did not convince me, it was too abrupt. For me, the story line was too weak, because it is only about Jack and Josie's relationship, it might have worked better for me if the characters were fleshed out better, now it missed depth and emotion.

So for me Claimed was a fast-paced, easy and enjoyable read that entertained me for several hours but it did not grab me emotionally, yet it piqued my interest enough to want to read the stories of Jack's brothers.