Hands On
Christina Crooks
﻿Genre: Contemporary Romance
Publisher: Samhain Publishing
ISBN: 978-1-60928-246-2
Length: Category
Format: ebook
Publication Date: November 16, 2010
Ebook received by author for review
Blurb:
Want to make Fate laugh? Try telling her who’s in charge.
Talented, down-on-her-luck puppeteer Ginnie Anderson’s life seems destined to fall down around her ears. Much like the rented bungalow that’s just collapsed in a heavy rainstorm, endangering her precious collection of marionettes.
Her livelihood in need of protection and repair, she can’t refuse her landlord’s offer of temporary shelter in his magnificent home. Under his roof, though, she finds her hard-won grasp on her independence slipping—and herself falling into his arms.
The hallmark of Harry Sharpe's business success: he never makes the same mistake twice, particularly when it comes to manipulative women. So why is Ginnie, who pulls strings for a living, like a siren’s song in his blood? It’s best to put temptation as far out of reach as possible.
Yet when Ginnie’s past threatens to destroy the life she’s built for herself, Harry must decide which is more important. Holding tight to his sense of self preservation, or letting go to capture Ginnie’s fragile heart—before it breaks into a thousand pieces.
My review:

Ginny Anderson is determined to start her life over; she has left her controlling ex and rented a charming, little bungalow. She has a new job and wants to make a career as a puppeteer, then her charming yet desperate-in-need-of-repair bungalow collapses in a heavy rainstorm and she has no other choice than to accept the offer of her landlord, Harry, to move in with him temporary. She falls hard and fast for Harry even when he tells her he isn’t looking for a relationship, she is setting herself up for more heartache yet she can’t help herself.

Not so long ago Harry Barrett Sharpe was a well-known real estate tycoon, but after his manipulating ex-fiancée tried to ruin him and destroyed his reputation, he retired from the public eye and now lives a solitary-minded life. He lost all faith in women and vowed to never get involved with a woman again, and then fate throws Ginny in his life. Ginny is a puppeteer and literally pulls at strings for a living. She turns Harry’s life upside down and gets under his skin yet his self preservation won’t allow Ginny to capture his heart, now Harry has to make a choice.

Hands On is a short novella of 125 pages and I have said it before in other reviews of short stories; me and short stories are usually not a good combination, the reason why I wanted to read this story was the blurb, I found the fact that Ginny was a puppeteer intriguing and different. Unfortunately Hands On and I are not a good combination somehow; it did not work for me on various levels. I did not have a connection with the main characters and I did not buy into the story completely.

Ginny Anderson is a puppeteer who has left her controlling ex to start her life over again and make it on her own. Determined to be herself from now on instead of how others (her mother and ex) like her to be she has accepted a job elsewhere. The timid and meek girl is gone. I can understand that she feels free to be herself for the very first time in her life and to do whatever she wants but it takes Ginny only one afternoon to fall head over heels for Harry, she reminded me of a giggling teenager with a crush. The giggling teen act irritated me throughout the story; however I did like her devotion and passion for her work as a puppeteer. But I could not reconcile her actions with her past therefore I did not feel a connection with Ginny.

And I felt the same thing with Harry; I could not connect with him. He is a successful businessman and a recluse thanks to his ex-fiancée who destroyed his reputation. But he immediately offers Ginny to move in with him temporarily, mostly because he is her landlord and feels guilty but he had other options to act rightly. He is an honest, hard-working man but emotionally damaged by his past. Yet I could not reconcile his actions with his past either and therefore I never bought into this story completely.

The whole story centers on Harry and Ginny’s relationship. Hands On is a classic love story about two people finding true love, but it felt so rushed to me and therefore at times unbelievable. To me the story’s Achilles heel is that the characters were contradictive and therefore not well-balanced. Hands On fails to reach its full potential because it is only 125 pages and therefore it is not explored in depth enough.

But I loved the grand finale when Harry and Ginny finally get things right. Christina Crooks’ writing is witty, smooth and captivating, and in spite of its shortcomings, Hands On is still an enjoyable, fast read. 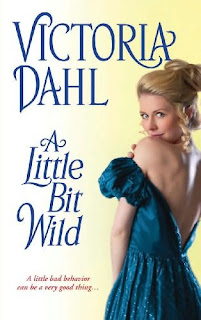 
He Is Not What She Had In Mind.


Jude Bertrand is not an excellent dancer. Nor does he wear the most fashionable coats. But when Marissa York's brother approaches him, desperate to preserve Marissa's tenuous reputation, Jude does prove heroic enough to offer to marry the girl. In fact, the union should more than make up for his lack of social graces-and his own scandalous past...


Marissa knows that betrothal to the son of a duke-even one as raw and masculine as Jude-will save her from ruin, but that doesn't mean she's happy about it. Soon, though, she finds that Jude has a surprisingly gentle touch-and plans to use it to persuade Marissa that their wedding day cannot come soon enough...

Although I have several books of Victoria Dahl on my shelf A Little Bit Wild is my first acquaintance with Dahl’s work but it won’t be my last. I had no problem in finishing this story in one sitting, Dahl’s typical style of wit had me flipping the pages and I could not stop. A Little Bit Wild is not your average historical romance novel; it is as the title says a little bit wild and unconventional. Jude and Marissa, the main characters, break every rule the stiff Victorian society has laid on them.

This story takes place in England in 1847 and Dahl literally drops us in the middle of a scandal. Marissa York comes from a respectable, noble family but scandal always seems to find her family. She gets caught red-handed by her brother while making love, her reputation is ruined. There is only one solution to fix her reputation and avoid scandal, Marissa must marry and fast. Only Marissa has no intention of getting married and especially not to the guy who took her virginity. But her brother is relentless, so when Jude Bertrand, a friend of the family and house guest, offers to marry her she has no choice but to agree for the time being. Jude is raw, muscular and anything but graceful, he is everything she is not looking for in a man but she soon finds out that Jude has a very pleasant touch…

Jude Bertrand, born out of wedlock, is the acknowledged son of a duke; he has always liked Marissa York, even though she never really noticed him. He has often seen her eyes linger on elegant young men he still considers to be boys not men. He is also the only one who noticed that Marissa is full of passion and she desperately tries to contain it. She is different than the other ladies and her streak of wildness turns him on, he plans to use it to his advantage and show Marissa that she really doesn’t want to spend the rest of her life with a graceful young lad but that she needs a real man like him who knows exactly what she needs…

This story is even-paced and character-driven. It is a journey of soul searching, a heroine who claims to be a proper lady but is really a bit wicked and an illegitimate son who wants to be truly accepted for the man he really is and not just as the acknowledged son of a duke. Marissa is headstrong, feisty and outspoken but also a bit spoiled, shallow and naïf. She likes to flirt and seduce men to kiss her; she does not realize that she is restless and bored with her life as it is. Jude is honorable, loyal and strong. He is coarse-featured, broad shouldered with a wide face that looks hewn from stone. He has masculine features and an unrelenting height; he looks more like a blacksmith than a gentleman. He likes to provoke Marissa into very unladylike conversations.

I love the way their relationship unfolds, their witty, bold and naughty conversations vibrate from the pages. They really are perfectly fitted for one another. Their emotions and passion spice up the story even further. There are not many secondary characters in this story, but the ones that caught my eye were Marissa’s brothers. Also a bit unconventional, they are known for their bad temper, their bickering and the way Dahl describes the occurrings in the York's family home reminded me by fits and starts of a slapstick, really hilarious. But the brothers mean well and will do anything to protect their little sister and family name. Edward, who is the head of the family obviously runs his family with a not so firm hand and Aidan is the tortured one, now he is the one I would love to see in his own story.

The plot thickens a bit when the family gets blackmailed and Marissa’s escapades are about to become public knowledge. Although you can see the blackmail coming from a mile away the blackmailer comes from an unexpected corner. There were also a few things that irked me about this story, although Marissa is a very adventurous and untamable lady, she really gets a lot of freedom. In those days ladies were not left alone with a man without a chaperone, but Marissa has done so several times, she pretty much goes her own way, Jude even spent time in her room. For such a smart lady she does not really seem to care for her reputation. At some point she even drinks brandy, but a lady was not allowed to drink hard liquor in those days. These things were “not done” at that time and a respectable family like Marissa’s would not have allowed that. Also modesty and propriety demanded in those days that a pregnant woman of the gentry who is already showing remained confined, she certainly would not have openly received three men no matter how urgent the matter was. So even though Jude, Marissa and the York family are a bit unconventional for those days these things irked me a bit.

But I did enjoy A Little Bit Wild very much, it is a refreshing story. The dialogues sparkle with wit and both Marissa as Jude are penned down so vividly that they jump of the pages. A Little Bit Wild is refreshingly different and wickedly witty read.