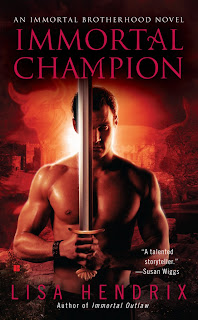 Summary:
He faces a future of cold uncertainty, until her warm embrace…

Part of a Viking crew of warriors cursed by an evil sorceress, Gunnar the Red must toil through eternity as half-man, half-beast, living out his days as a great bull, while his nights are spent in human form. And though he keeps mostly to the wilds, his heart yearns for the simple comforts of man—and the chance to redeem a tragic past…

Seeking refuge from a bitter winter in the welcoming hall of Richmond Castle, Gunnar rescues two maidens when a blaze erupts—and his destiny is forever altered. For one of the young women is Lady Eleanor de Neville, who is immediately entranced by her rescuer. Her kiss of gratitude—the brief touch of her lips against his cheek—awakens a longing in her soul. And even when she is betrothed to another, Eleanor never forgets her courageous knight.

When Gunnar rides back into Eleanor’s life, she is consumed by undeniable passion. And though his body surrenders to her every touch, Gunnar’s heart remains imprisoned by the curse—and only the magic of the truest love can save him…

My review:
Nine Norse warriors were cursed for eternity by the dark magic of the sorceress Cwen after they had killed her son in a raid for treasure. They were forced to spend half of each day as humans and the other half as beasts, each warrior a different beast. But hopes shines on the horizon for the curse can be broken by finding true love and their amulet. Two warriors broke the sorceress’ curse already, now Cwen is furious and has vowed to never ever let the remaining seven warriors undo her spell. To make life even more unbearable she has immersed England in a true, harsh winter. And so starts the story of Gunnar, son of Hrólfr, also known as Gunnar the Red, cursed to spend his days as a great bull and his nights as a human…

Although Gunnar and his fellow warrior Jafri usually keep to the wild, the cold winter forces them to seek shelter and warmth at Richmond Castle, Jafri during the day and Gunnar at night. Gunnar tries to keep a low profile but when a fire occurs he immediately helps and saves two young damsels in distress, Lady Eleanor de Neville and her cousin Lucy. Eleanor is immediately taken with him but Gunnar leaves the same night knowing he cannot stay any longer. But the Nornir (fate-spinners) have woven their life-strands firmly together and so they meet again four years later. Eleanor is no longer a girl and she and Gunnar are consumed by their passion, this convinces Gunnar that he has found his true love at last, but Eleanor is promised to another man. Political scheming, misunderstandings and honor keep them apart, yet once again the Nornir throw them together. But love alone does not break the curse and ends Gunnar’s torment, not if Cwen has anything to say about it…

If Lisa Hendrix had lived in the past, she probably would have been a skald in the Viking Age. There is something about Hendrix’s voice that pulls you straight into her story, from page one she throws you back in time to the 14th century and thanks to her keen eye for historical details it feels very authentic. With a fluent, even-paced, but stunning storyline she kept me intrigued and she urged me to keep on reading Immortal Champion by blending a great, emotional charged romance with a fascinating legend and paranormal elements. It was a wonderful ride through a range of emotions; I already loved Hendrix’s first two stories in this series and Gunnar’s story made me fall in love all over again with the Immortal Brotherhood.

Of course I am a bit biased, I love a good historical romance and when I read the words Viking, curse and brotherhood in a blurb I am sold. Besides the thrilling ongoing plotline, Lisa Hendrix really has me hooked with her characters, each of her Norse warriors make me week in the knees. Her heroines are not annoying or completely helpless; neither are they G.I. Janes (I hate that). They are spirited and smart. Hendrix’s characters are three-dimensional, they feel real and they take you with them on their emotional journey to find their HEA.

I was so rooting for Gunnar and Eleanor; they had so many obstacles in their way to find each other. Gunnar is the kind of hero you fall in love with immediately, he is betrayed by love and his curse weighs heavy on his shoulders, his torment is heart-wrenching. He is a real warrior; strong, loyal, honorable and full of hope to one day break his curse. He is mysterious yet always in control except when it comes to Eleanor.

And Eleanor is a great heroine, she has her own bucket full of trouble. As a lady in her position she tries to make the best of her life but she is just another pawn in her father’s wheeling and dealings. She is loyal to her family, is smart, resourceful, bold and fearless. She learns quickly to outwit her father. I loved the chemistry between her and Gunnar, as a reader I got a good sense of their inner-workings, their insecurities, issues and desires. They are perfect for each other!

There are many secondary characters enhancing this book. The sorceress Cwen remains a mystery to me but throughout the story it becomes clear that she is regaining power again as years go by. Gunnar’s fellow warriors Brand, Ari, Jafri and Torvald drop by and I have a feeling that Brand and Ari are going to be important characters for future parts in this series. Eleanor’s family is well represented, some of them are very warm and likeable others are not. And then you have Lucy and Percy, not only are they good friends of Eleanor but they are also very important for Gunnar’s hea. I loved their part in the story.

The plotline of this story is fabulous, a perfect mix of myth, history, magic and romance. With each book we learn a little more about the brotherhood’s curse and Cwen. And yet it looks like breaking the curse is going to be more difficult and complicated with each book. There are many details and little sub plotlines within the plot and somehow they all come together at the end of the book, therefore it is impossible to put the book down!

Lisa Hendrix has penned down another winner with Immortal Champion and I already crave for the next part in the series. Let’s just hope we get to read the stories of all remaining warriors.

So Immortal Champion in a nutshell: brilliant, mesmerizing and addictive to the very last page! A must-read!