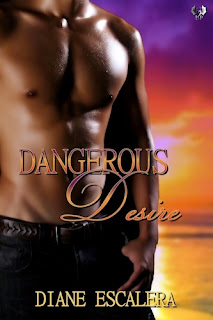 Sometimes you have to lose one thing to find another.

Sienna Diaz is desperate to find her missing beagle, no matter what it costs. She hires Cruz Santino, the best—and hottest—in the business. He’s an ex cop, dangerous on many levels, which comes in handy when all evidence indicates her beloved pet was snatched to use in a dogfighting ring.

Cruz will do whatever it takes to find Sienna’s lost pet, but he also wants results from the smokin’ hot attraction between them—and he isn’t above breaking his own hands-off-clients rule to get there. However, until he brings her beloved beagle home safely, he won’t have Sienna's undivided attention...and affection.

"What a crappy day. If one more thing went wrong, Sienna Diaz would scream so loud she'd pop an artery."

When Sienna Diaz comes home from work she discovers her house has been trashed and her beloved dog, Zola, is missing. Desperate as she is, she hires Cruz Santino, an ex-cop who now tracks down missing pets for a living. He quickly discovers that her dog was stolen for a purpose, to be bait in the dog fighting industry. Sienna will do whatever it takes to get her pet back but cannot fail to notice what a hot guy Cruz is and the way he stares at her, their attraction is mutual. Three years ago she got divorced and since then her love life has been nonexistent. Perhaps it is time to revive it and Cruz might be the right man for the job.

Cruz Santino cannot take his eyes off the hot woman who has hired him to find her missing Beagle. The attraction between them is explosive and he is determined to explore it further, but finding her pet has to be his top priority. As the illegal dog fighting industry attracts lots of thugs and criminals Cruz decides to keep Sienna at his side so she is safe. While they search for Zola they also explore their explosive chemistry together and Cruz discovers that Sienna might be the one for him. Now he only has to convince her that he is the one for her.

I really liked the blurb of this story but I wasn't so sure about the hawtness of this story. A pet detective... first thing I thought of was Ace Ventura, mmmm Jim Carrey, no offense, but he is not very hot in my book, but Ace Ventura is no match for Cruz Santino. The guy is hot with a capital H! In no time the two main characters, Sienna and Cruz, whisked me away to sunny Florida and held me captive with their romance till the very last page. What a pleasant, hawt surprise this story turned out to be. I loved it!

Sienna Diaz is a character many readers will easily connect with. She is in her late 30's, divorced with a full-grown daughter away at college. The last three years of her life have been all about creating a new life for herself. So far she has played it safe, thankful for finally having some inner peace. She somewhat lost herself in her marriage and is now finding her true self again. She is fiercely independent, sassy, witty, and direct. But she is also a great mom, compassionate and caring; she is in control of her life. So when Cruz enters her life and she feels this strong attraction to him she knows she has to act on it.

Cruz Santino is a very likeable character; it is very easy to fall in love with him. He used to be a cop but lost his motivation to continue and quit to start his own company Top Dawg. He runs his office together with his younger brother. Their brotherly banter cracked me up. Cruz has many different layers; he is very much an alpha male, very protective of the ones he loves. He radiates power, control, raw appeal and has a steely exterior. All of this conceals a much gentler side that is only reserved for certain situations. He is easy to get along with and his relationship with Roman, his dog, is touching and mirrors what kind of guy Cruz really is. Ambitious, always in control, responsible and loyal to the bone. Yet also very caring, honorable and laidback. He knows what is important in life, but building his business took up all his time leaving no room for love.

"Her eyes slowly drank him in. Good God. He had the sexiest bod she'd ever seen. Taut and tan, his muscles were chiseled in a way that gave his dimensions beautiful symmetry. Tori would 've been impressed. She'd always preached about the importance of muscle balance. Some men took it to the extreme. Not Cruz. He sported a tapered waist with shredded abs, V-shaped torso, and arms that made her drool ---."

Basically Dangerous Desire has two plotlines, the romance and the suspense part. The whole story takes place in approximately 4 days and it is only 194 pages long. Yet Diana Escalera manages to create a believable story, it is fast-paced and off and running from page one but it did not feel rushed to me at all. I was afraid that the missing pet angle would be laughable and too simple to create a thrilling suspense part but it had dept and was thrilling right up to the end because the story takes you to the dark, twisted world of the dog fighting industry, a pet’s owner worse nightmare. Both the romance and the suspense part are in balance, I love how the secondary characters like Cole, Dan and Tori easily blend into both parts of the story, giving the story an extra dimension.

From the moment Cruz and Sienna meet you feel the mutual attraction rolling of the page, you could say it was love at first sight for them, but it really was lust at first sight. Love came a little later, which is why I totally believed in them. I love the fact that Sienna is five years older than Cruz and that this is not an issue between them at all. Miss Escalera fabulously builds up and releases the tension between Cruz and Sienna with hot, erotic scenes and I love how they grew closer with every bit they got to know about each other. The sex scenes are sexy and hot and it clear that they belong together.

This story was a fabulous reading experience for me. Miss Escalera’s voice is thrilling and full of passion. I am looking forward to read more of her work. Fast paced and fluent, witty and moving, Dangerous Desire is sizzling hot from start to finish.