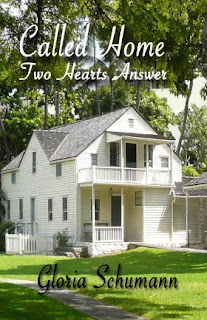 “Emma Benson's view of life was crafted as a child by the death of her brother, the abandonment by her father and later, the man she trusted she would marry. A teacher by training, she forgoes her chosen path to save the Wisconsin farm she calls home from financial ruin.

A tornado threatens damage, but David Schlosser—back in town after years in New York writing best-selling novels—could ruin her neatly tended life. He's looking for the charms of the small town he once rejected and finds more than he bargained for. He risks everything to get what he wants.

The storms of life throw Emma and David together and into the world of a criminal determined to ruin their plans by any means necessary. Robbery and near death connect Emma and David to their nemesis and during the throes of securing life and limb they make every effort to resist falling for one another.”

First line of book:“It felt like home and yet it didn’t.”

Until now Emma Benson’s life has not been easy, all the important men in her life left her. Her relationship with the man she loved ended, her brother died when she was young and she saw how her father walked away from her and her mother. She left Wisconsin to be a teacher but came home to help her mother save the farm she grew up on from financial ruin. She does not need another man in her life telling her what to do, these days she only relies on herself to avoid another disappointment. She did not bank on David Schlosser to be so persistent to help her and the fact that he is so attractive to her does not help her case either.

David Schlosser could not wait to get away from the small town he grew up in, determined to make something of himself he went to New York to become a successful writer. Now, years later, he is a successful and famous writer but he is tired of the fast life in the big city. He craves for the charms of the friendly, little town he grew up in, he goes back to buy himself a place he can call home. He ends up seeking shelter from a tornado at the Benson farm where he meets Emma. He cannot get her out of his mind but she has made it clear she wants nothing from him, but David is not one to back down from a challenge. So now he is not only hunting for a place to call home, he is also determined to make Emma his.

Emma is a headstrong, fierce, outspoken, prickly and too-independent-for-her-own-good kind of woman. She has learnt the hard way that she can only rely on herself so she will never ask for any help when necessary. She is distant and does not really participate in life to avoid emotional pain.
David is a well-balanced person. He is kind, honest and successful. He is at a point in his life that he knows exactly what he wants and goes for it. He is very patient with Emma and seems to know exactly what she needs; it was very easy to connect with David because he is so laid-back.
And then there is Nancy, Emma’s mother. Nancy is a lovely, caring and hardworking lady who lost her son and had to raise Emma on her own while running a farm. Although she had a tough life she is never bitter and always tries to make the best of things. She is getting older and needs help, but she is shrewd enough to know that David will be good for Emma so she pushes Emma and encourages David.

Called Home has a suspense part and a romance part, and though the focus of Called Home is on the romantic development between Emma and David, the romance goes hand in hand with the suspense. The changes in Emma’s and David’s relationship are slow and subtle, but would imo not have been possible without the suspense part. Some thug attacked Emma in the bookstore where she works in the evenings, after this happens the attacker continues to threaten her. This leaves Emma vulnerable and she allows David to help her and protect her, it opens the door for them to become closer.

Emma and David are at very different points in their lives. While David is financially secure for life and has the career as a best-selling thriller author he always wanted, he came home voluntarily to create a home for himself. Emma came home because she was needed at the farm, to help her mother. She has given up her passion to teach and does not live her life the way she had hoped or planned. She struggles to save the farm but also with herself.

Without the attack Emma would have kept the wall around her heart firmly in place, now David can slip through the cracks of that wall to get through to her, to convince her that he won’t leave her. There are no steamy love scenes in Called Home, but the story does not need it and I did not miss them at all. There is the undeniable, smoldering chemistry between David and Emma and there are plenty of stolen kisses to back up their romance.

There are not many secondary characters besides Nancy, but there are a lot of town folks who pass in review. I love how they all add to the charms of a rural, little town where everyone knows each other’s business and everyone looks out for another. Gloria Schumann has a keen eye for details and somehow she manages to bring to life a whole, small town with its shops and inhabitants.

The story is even-paced yet it pulled me in instantly. As a reader I got dropped in the kitchen of the Benson farm at page 1 and at once I connected with Emma, Nancy and David while they tried to survive a tornado. And though I had a pretty good idea how this story would develop it did not stop me from reading and it had a few surprises here and there. I loved how this story is about “normal” people and their struggles with life, I loved following Emma and David on their journey towards happiness, not once was it boring and I believed in them as a couple.

This is the first story of Gloria Schumann that I read, but it won’t be the last. I love her voice, the fluent writing and her keen eye for details and characters. All the characters in this story are “real” and belong to that little town, their actions fitted in the story perfectly. The romance is beautiful and the heart-wrenching. Called Home is a must-read for readers who love a classic romance with a touch of suspense!