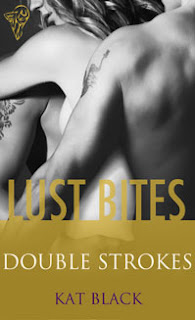 Just what is a good girl supposed to do, faced with the wicked temptation of not one bad boy, but two?

No matter how hard good girl, Gemma Trent, tries to run from the mistakes of her past, she can't seem to escape the memories of two hard-bodied, hot-blooded rowers, and the shameful things she let them do to her one crazy night five years ago in the college boathouse. Perhaps only by facing up to those mistakes can she prove that she’s no longer that sort of girl, and finally set herself free.

As determined as Gemma seems to be to smother the truth of her passions, Nathan Hunter and Ben Pearce—having already had her slip through their callused fingertips once—are equally committed to fanning the embers and rekindling the fire they suspect still smoulders deep inside. Now that they have her within reach again, all they have to do is convince Gemma to put her own self-imposed prejudices aside, and remind her just how good it feels to share.

First line of book:“In one of the bustling spectators' enclosures set up along the Thames riverbank for the annual Henley Royal Regetta, Nathan Hunter milled with a group of  old university rowing club peers, reunited for final days of the world-famous competition."

I loved the dynamics between Gemma, Nate and Ben. Gemma came to the Regetta to prove she has moved on, that she has grown out of these feelings for Ben and Nate. She is beautiful, likeable and sensitive. Nate and Ben are like day and night, both are tall and athletic but the comparison ends there. Ben is blond, bright and fair. He is charming and easy with a playful sensuality. Nate is the complete opposite; he is dark, intense with a fiery passion and he is the brooding (caveman) type. Together they make sure Gemma experiences her sexual awakening and they give her what she has been missing in her life. The sex is explicit, smoking hot and intense and I loved how it also mirrors the personalities of Gemma, Nate and Ben.

Kat Black’s characters leap off the pages, especially her two men. I love the raw, sexual potency of the pair. Double Strokes worked for me because Gemma, Nate and Ben already have a common past. Before the grand finale Kat Black skillfully blends their past and the present together so I understood Gemma’s insecurity, her hesitation and cravings very well, but also Ben and Nate’s perspective is crystal clear.

Double Strokes is a fabulous, sensual ménage story, I could have read on for hours but I ran out of pages way too fast!