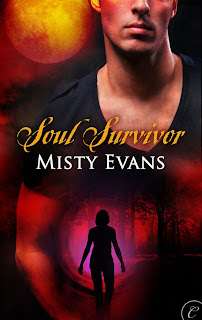 Blurb:
“Haunted by tragedy, FBI profiler Rife St. Cloud is driven to find the person who brutally attacked six women. Unfortunately the only survivor, Keva Moon Water, has no memory of what happened, and the evidence makes her the prime suspect.

Keva cannot die. She has waited a thousand years to be reunited with the man she loves, whose soul sleeps within Rife. Though he refuses to believe her claims of immortality, there’s no denying the passion that burns between them. Keva desperately hopes their sexual connection will be enough to awaken Rife’s memories of the love affair that started a war and bound their souls together for all eternity.

But when Keva’s own memories come trickling back, she realizes that a future with Rife depends upon confronting the mistakes of the distant past…”


First line of book:
“Hundreds of Virgin Marys stared at Rife St.Cloud from every surface inside the old church, their serene eyes in direct contrast to the bloody bodies of the six dead women at his feet.”

Keva Moon Water is cursed with immortality after a spell that went wrong. She used to be the Chieftess and Shaman of the Salt Coast Clan. She has waited a thousand years to be reunited again with her soul mate, the man she loves, whose soul sleeps within Rife St.Cloud, only then will the curse end. There is a problem: Rife St.Cloud does not remember her and he has come to investigate the murder of her beloved sisters and she is the prime suspect.

Rife St.Cloud is a FBI profiler on a mission, to catch as many murders as he can. He does not believe in magic or any other paranormal activities. He believes in what he can see and touch, but the moment he lay eyes on Keva his instincts tell him she is not the killer he seeks. He feels this strange deep connection with her and has visions of a life in the far past, yet what she tells him makes no sense at all.

Enann is the son of the Red Fire chief and was supposed to marry Keva, but she rejected him and performed the ceremony with his half-brother Kai, whose soul has now awakened in Rife St.Cloud. Now Enann has used his evil powers to find a way to travel through time to take Keva back in time to do her duty and have his revenge.

Keva realizes that no cop or FBI agent can catch the killer of her beloved sisters, only she can. To save Rife/Kai she has to face the consequences of her past mistakes and try to fix the mess she created.

Soul Survivor is the first part in the Lost World Series by Misty Evans, and she had me hook, line and sinker right from the start. Two soul mates destined to be together yet cruelly separated find their way back to each other; yes that has my romantic heart racing. The plot of Soul Survivor is different and refreshing and drops us right in the middle of the action. A murder scene where Keva rises from the dead because she feels her soul mate is near, the mystical vibe that surrounds the scene and the masculinity of Rife St.Cloud that rolled of the pages in huge waves just the way I like it had my full attention immediately. And yet I had no clue where this plot would take me.

So as the plot unfolds it is clear that the rites and traditions of the Salt Coast Clan play an important part in Soul Survivor. Bit by bit Misty Evans takes us further into Keva’s mystical world where the past is back to haunt the future. I love how she combines the mystical elements of Native American lore with the romance and the suspense and though the story is fast-paced from the start it does not feel rushed, somehow the pace and different elements all fit in the story perfectly.

And though the romance between Rife (I love his name!) and Keva develops rather quickly, which is normally a minus point with me, it did not bother me in this story. I guess it is because they already shared a history in the past and their chemistry for each other in the present is obvious because their souls recognize each other. Their interactions are intense and at all times there is this sensual undercurrent between them. This and the fact that Evans convincingly let Rife struggle to come to grips with all that has happened, which is consistent with his character, made me believe it all.

The only other key-character that plays an important part in Soul Survivor is police chief James Chee, Rife’s grandfather. As a descendant of Native Americans he has a healthy respect for everything mystical and he is the one helping Keva to discover what is going on and to show Rife that not everything is as black and white as Rife wants it to be.

The second-half of the story had me mesmerized, Keva travels a thousand years back in time to face her mistakes and stop Enann from doing more harm. She comes face to face with her younger self and Kai, she has to save lives without altering the past, and then she has to return to the present and face the murder investigation. It sounds far-fetched but when you are engrossed in the mystical world of Soul Survivor it all makes sense and every little piece of the puzzle fits perfectly in the plotline.

Misty Evans kept me on the edge of my seat till the very last page and managed to create a believable story with a satisfying ending. She blends an intricate plotline of past and present easily with the mystical stuff, the thrilling suspense and the passionate meant-to-be-romance.

Soul Survivor is an addictive, fast-paced romance with a strong mystical vibe. I loved it! I can’t wait to read what Misty Evans has up her sleeve for us with the next part in this series!