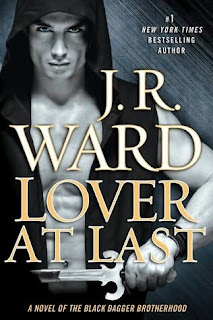 Blurb:
“Qhuinn, son of no one, is used to being on his own. Disavowed from his bloodline, shunned by the aristocracy, he has finally found an identity as one of the most brutal fighters in the war against the Lessening Society. But his life is not complete. Even as the prospect of having a family of his own seems to be within reach, he is empty on the inside, his heart given to another....

Blay, after years of unrequited love, has moved on from his feelings for Qhuinn. And it’s about time: it seems Qhuinn has found his perfect match in a Chosen female, and they are going to have a young. It’s hard for Blay to see the new couple together, but building your life around a pipe dream is just a heartbreak waiting to happen. And Qhuinn needs to come to terms with some dark things before he can move forward…

Fate seems to have taken these vampire soldiers in different directions... but as the battle over the race’s throne intensifies, and new players on the scene in Caldwell create mortal danger for the Brotherhood, Qhuinn finally learns the true definition of courage, and two hearts who are meant to be together... finally become one.”

My thoughts:
I fell in love with John, Blay and Qhuinn the moment they entered the Black Dagger Brotherhood world, but I was never really into the Team Qhuay hype. So I had no sky-high expectations for their story, the last three BDB books I liked but I wasn’t really emotionally invested in them like with the first three books in the series. I did not like the way V’s story ended and the low point of the series for me was Phury’s story. So why keep on reading this series? Because I am a sucker for all those domestic BDB mansion scenes and I love to catch a glimpse of the other brothers and their shellans/mates.

The problem I have with Ward’s stories is the constant switching between plotlines, and yes it annoyed me as well with Lover At Last. I really wanted to lose myself in Blay and Qhuinn’s romance, but every time their romance made any progress Ward switched to a secondary plotline or Qhuinn and Blay started to bicker again over things like a bunch of girls and I grew tired of the miscommunication between them. I also did not like the way Blay lied about his break-up with Saxton to Qhuinn.

“”I’m not with anybody,” Qhuinn said.

Blay laughed again with an edge. “As in a relationship? Of course not. But do not expect me to believe that you’re spending your off time crocheting doilies and alphabetizing a spice rack with that female.”

There were a few heartbreaking moments in their romance that grabbed me by the throat, but they were few and far between. Basically I felt that the romance was snowed under by all the other characters and plotlines, their romance and HEA was on hold till the last chapters in the book, only then it gained momentum. It wasn’t until then that Qhuinn and Blay finally connected on a deeper, emotional level, this did not make their romance very believable for me.

I really liked Layla in Lover At Last; she really is a strong character. But I did not care much for the way Ward handled Layla’s miscarriage and the miraculous healing by Payne; I fail to see the necessity of this plotline to the story. Layla has a strong connection to Xcor and I love to see where Ward is going with that one. Assail and Sola are interesting characters, they have a strong chemistry going on, but for me their plotline stole Qhuinn and Blay’s limelight.

Another plotline that demands more and more attention is the one with iAm and Trez; it looks like Ward is slowly introducing us to yet another world/species within the BDB world. I have no clue what Ward has up her sleeve with these guys and I honestly don’t know if I like these characters, but I do understand why Ward has moved them into the Brotherhood mansion. With all the brothers mated, this will give Ward a reason to continue to visit the mansion in the future and we all love those visits to the BDB mansion.

And then there is the power struggle for the throne, Wrath is becoming a king more and more and I love his interactions with his brothers and his shellan Beth, Qhuinn’s induction into the Brotherhood was heart-warming, I was fanning myself… Those scenes are why I still want to read this series, why I still dive into a new BDB release the moment it hit the shelves.

As for Lover At Last, there were things I liked and things that did not work for me, it certainly did not knock my socks off in the romance department. There were just too many other plotlines occupying the pages instead of Qhuinn and Blay’s romance, therefore I was not emotionally invested in this story.

The next chapter in the BDB series (spring 2014) will probably be titled The King and it will be about Wrath and Beth, I can’t wait to revisit them and see how the story develops further, hopefully their story will grab me by the throat and demand my full attention again. Wrath won’t have it any other way… I hope.